Australia’s Alex Lahey makes St. Paul one of the 14 lucky cities on her short, North American tour, on Wednesday, August 28th at the Turf Club.  Alex will be showcasing her new album, The Best of Luck Club, along with many of the catchy songs from her first album, I Love You Like a Brother.  Kingsbury is the opening act.  Doors open at 7pm with show beginning at 8pm for this 21+ show.  Tickets are just $16 in advance HERE.

On her sophomore LP, The Best of Luck Club, 26-year-old Alex Lahey navigates the pangs of generational ennui with the pint half-full and a spot cleared on the bar stool next to her. Self-doubt, burn out, break-ups, mental health, moving in with her girlfriend, vibrators: The Best of Luck Club showcases the universal language of Lahey’s sharp songwriting, her propensity for taking the minute details of the personal and flipping it public through anthemic pop-punk.

Lahey’s 2017 debut I Love You Like a Brother encases Lahey’s knack for writing a killer hook and her acute sense of humor delivered via a slacker-rock package – and, in a way, The Best of Luck Club picks up where that record left off, but sprinting forward. Lahey dives headfirst into a broader spectrum of both emotion and sound through polished, arena pop-punk in the vein of Paramore with the introspective sheen of Alvvays or Tegan & Sara. Here, Lahey documents “the highest highs and the lowest lows” of her life to date.

The first inklings of The Best of Luck Club came together on a shitty guitar while Lahey spent the bulk of her time on the road. The break-out success of I Love You Like a Brother took her beyond the adoration of Australia to her first taste of global touring; festival slots at the likes of Lollapalooza, Bonnaroo, and Osheaga; and her American TV debut on Late Night with Seth Meyers. Amidst the frenzy, Lahey found the time to tinker with her thoughts, eventually landing in Nashville for intensive songwriting sessions. Lahey would lock herself in a room for 12-hour days, and ended up churning out more than half the songs for the record. Most importantly, Lahey found The Best of Luck Club thesis while she was there – which explains the familiarity and relatabity through Lahey’s new LP.

“When I was writing all the stuff in Nashville I was really inspired by the dive bar scene there and the idea that at these dive bars there’s no pretentious energy,” sheexplains. “Whether you’ve had the best day of your life or the worst day of your life, you can just sit up at the bar and turn to the person next to you – who has no ideawho you are – and have a chat. And the response that you generally get at the end of the conversation is, ‘Best of luck,’ so The Best Of Luck Club is that place.”

For recording, Lahey returned home to Melbourne, Australia and set up shop for a month at Sing Sing South. Lahey co-produced the album alongside acclaimed engineer and producer Catherine Marks (Local Natives, Wolf Alice, Manchester Orchestra), and plays nearly everything on the record save for drums. The blare of saxophone across several tracks marks Lahey’s first return to the instrument in years, which she said began as a tongue-in cheek decision but more than anything pays homage to her past. Lahey credits Marks for improving her attention to detail, self-confidence, and guiding the process through with a sense of humor.

Barnstorming album opener “I Don’t Get Invited to Parties Anymore” recounts Lahey struggling with the often isolating pressures of adulthood, explaining, “It’s funny to think that there are people out there who are sort of putting their social life on ice in order to get their professional selves together,and as a result they’re not getting invited to parties anymore, and it sucks.”

The relatable “Don’t Be So Hard on Yourself” grapples with the overwhelming feeling of burn-out as Lahey reassures it’s okay to have bad days, while the electrified “Misery Guts” hammers at the other end of the emotional spectrum, marking the first time Lahey has written a song in the midst of anger. “I Need to Move On,” which Lahey says began as a musical ode to The Cure in its demo form, is guided back to pop sheen by Marks’ deft hand, chronicling the struggle of getting over a break-up before you’re ready.

“When we were making the record, Catherine and I would refer to different songs as playing dress-ups,” Lahey recalls, explaining all the different roles she deftly inhabits on The Best of Luck Club. “I really think that if you saw a montage of a person writing and making this record – and the places where it all happened – it kind of does look like playing dress-ups, in a way.”

“These songs are almost written for each patron of a dive bar,” Lahey says, “because they’re so varied in the experiences that are being presented and it’s almost as if each one of the songs is someone’s day. I feel writing these songs is me going into The Best Of Luck Club and reflecting, and coming out with each individual song.”

Caroline Kingsbury writes and produces Pop Rock in Los Angeles, CA, alongside her cat, Billy. You may see her frequenting the 99-cent store to buy cereal and listening to The Cure. Kingsbury unintentionally looks like Robert Smith with blue hair mixed with an Elvis impersonator. Born in Florida, Caroline does not have a southern accent or a tan but can be characterized as the “Florida Man” who can rock like Pat Benatar. The Kingsbury sound has evolved, she is now the ripe age of 23 and making music your parents would have danced to at their senior prom. 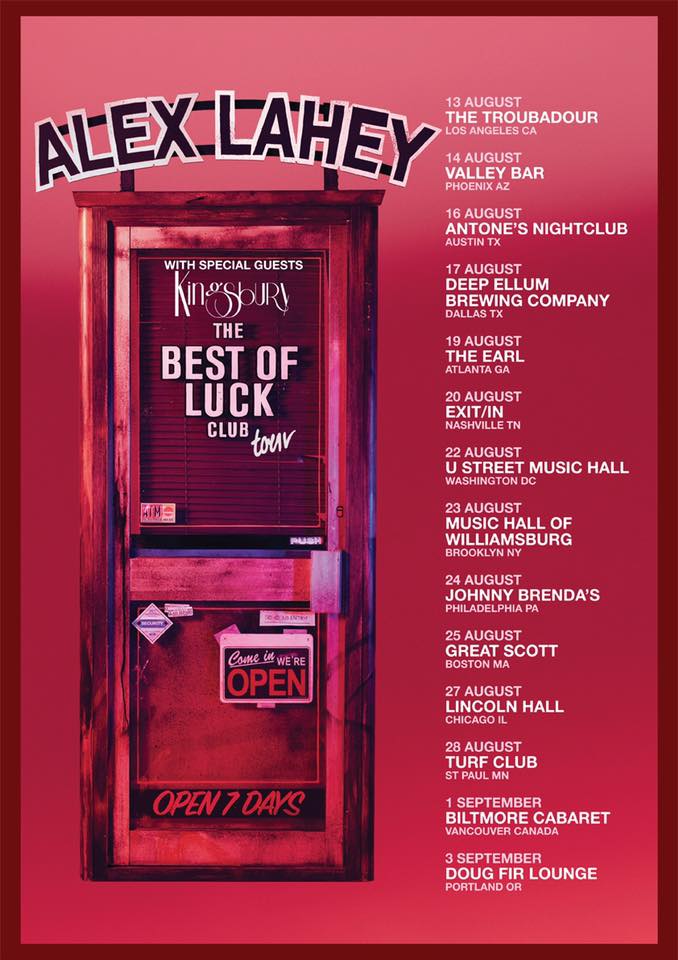 Halestorm Gets Heavy In Rochester at the Mayo Civic Center

If you were in the Rochester, MN area or were willing to make a drive there on Tuesday, September 26th, you were treated to a wonderful performance by Halestorm at the Mayo Civic Center!  There […]

A line was forming into the ally of the venue as I walked up to Fine Line Music Cafe in Minneapolis for the Morbid Angel, Watain and Incantation show. As I waited to enter the […]

Saturday night, Welsh trio The Joy Formidable whisked the good people of Minneapolis off the cold, dark streets and into their warm, dreamy realm at The Fine Line Theater. This show was exactly the kind […]