It has been around twenty years since my one and only encounter with The Blue Man Group. I don’t remember much from that night. I was young and out in New York City with my family and remember being in such awe of the city but also being much more impressed with The Blue Man Group. I couldn’t tell you what happened or why but for some reason that show left a lasting impression on me and I was more than excited to, after twenty years, experience the show yet again.

Just in case you’ve been living under a rock, let me explain (or at least try to explain) what The Blue Man Group is. The Blue Man Group is a performance group that makes rhythms and sounds out of every from your typical drum to PVC pipes to even the voices from the audience. Their sound ranges from popular music with rock undertones to obscure rhythm patterns that to some, may not even be considered music. The group is most often recognized by their look. Bald and blue while being dressed in all black. It’s a weird look but it fits perfectly with the weird music and the even more weird stage show. What I’m trying to say is that if you’re looking for something new, a little strange and very entertaining, The Blue Man Group is just that.

Now, let me set the stage for you. The lobby of the State Theatre was packed as I arrived on Tuesday night. Doors were opened later than expecting which gave me a chance to just observe the audience that would be attending the show. I couldn’t even try and give you a demograpic overview of what I saw– it was all over the place but that’s the beauty of a group like The Blue Man Group. They don’t cater to an age or gender or anything else that the world tries to classify us as. They cater to people who like music, like creativity and just want to be swept away to another place to escape the mundance tasks of day to day life. As the doors opened, the rush was on and State Theatre staff got everyone through the door and seated in record time. 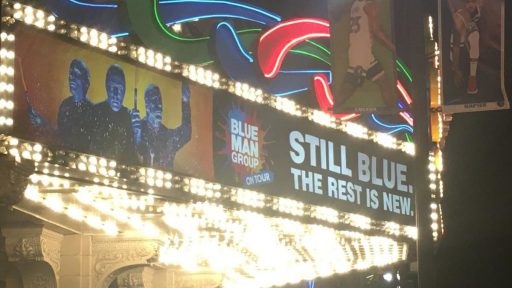 As I walked in to find my seat, my eyes landed on the stage and I instantly got butterflies in my stomach. The stage was covered in things you could hit, things you could pull and flashing lights. It was an ornate set up yet somehow simple with the middle of the stage completely empty and ready for whatever was going to come next. Conversations around me were excited and all seemed to go the same way. “Have you seen these guys before?” “My cousin saw them in Vegas and said I just had to go so I brought the kids along!” “Why are the people in the front wearing plastic ponchos?!” The curiousity and wonder circulating throughout the theatre prior to the show was enough for me to know I had made the right choice with my Tuesday night plans.

I’m not going to give you a play by play of the show because I highly encourage you to go check it out for yourself but I’ll give you some of my top moments of the night (although the entire night was a top moment when it comes down to it).

There were warnings out in the foyer that people who were late would be let in at the discretion of the staff. Well thank the Lord I wasn’t late. About twenty minutes in, two poor souls came in late. I’m not going to ruin what happens when you’re late but I will say that the bit ended with a roar of laughter from the audience. Moral of the story– if you take my advice and go see The Blue Man Group– don’t be late.

Audience particpation is key at a Blue Man Group show and although my hands got sweaty every time the three men took to the aisles looking for a volunteer, many others around me were willing and ready to join in. This audience particaption brought a sense of joy to the stage (as if the show needed more joy– pretty sure there’s a perma-smile still stuck on my face that formed at the beginning of the show) and the way people were so willing to play along with the speechless blue men (that’s right, on top of everything the members do not speak– at all).

It was an absolute thrill when the musicians took to the center of the stage with their waterdrums. This has turned into a bit of their signature and was the perfect ending to a perfect show. With water flying up from the drums and water coming down from the ceiling with lights shining on the drops in the absolute perfect way, it was one of those picture-perfect moments that, had we been allowed to take photos, would have had everyone behind their screens trying to get that perfect shot.

The music throughout the ninety minute performance ranged from everything to hard hitting and in your face to atmospheric and calming but the one thing that remained the same was the creativity and the showmanship. From the most simple hit on a standard drum to a complicated pattern on a homemade tube set up, everything was done with intention and a sense of fun and wonderment. Creativity in a live show can change everything and I only wish that half the shows I go to on a regular basis would have the same level of creativity and innovation that The Blue Man Group has every night. It would be a complete game changer.

I know this post was vague and I apologize but this is one of those shows that I truly feel like everyone should go ahead and experience themselves and take away what they want from it instead of me telling you what I took away from it. Grab you kids, grab your parents, grandparents, neighbor, coworker, grab whoever and go see The Blue Man Group. I promise you it’s a night you will not soon forget.

British band Hot Chip have been around since 2000 and have managed to stay influential in the electronic music genre. Their latest album “Why make sense?” was just released a couple of weeks ago. Saturday’s […]

I don’t tend to admit this but, after last night’s show, I’m willing to shout it from the rooftop. I love nu-metal. Go ahead and snicker and judge as I would expect nothing less but, […]

Seattle’s Beat Connection played the quite full 7th Street Entry Saturday evening. There may have been fewer folks then in the Mainroom they played the last time but the fans were very enthusiastic. As always […]