So you remember that time our own Markus Akre wrote “So An Old Guy Goes to an EDM Show?” Well today we give you “So A Millennial Goes to a Hall & Oates Concert.” I might not have felt as out of place at Hall & Oates and Tears for Fears at Markus did at the EDM show, but I definitely stood out as one of the few under 30 at the Xcel Center on Thursday night. “Sean’s got his conservative pants on tonight,” a middle age gentleman joked to his wife and group of friends at they made their way into the Xcel. It was absolutely no doubt that the majority of the nearly sold out crowd on Thursday night was there to relive all the 70s and 80s glory of perhaps two of the greatest bands of that era. As wonderful as it was watching slightly inebriated moms and dads fumble with their iPhones, I couldn’t but just soak in the magic of Tears For Fears and Hall and Oates.

Thursday night I traded my normal Uber to 7th Street Entry for $15 parking and an absolutely packed Xcel Energy Center. It was the antithesis to my normal evening of seeing relatively unknown bands in tiny back rooms and bars. As I watched these two massive bands absolutely command the Xcel Energy Center, I couldn’t help but imagine all of the tiny back rooms and bars these guys played to get where they are now. And this was the thing – both Tears For Fears and Hall and Oates played with that same energy, that same sense of novelty and awe at the fans singing along to song after song as some of those little bands down at The Cabooze or 7th Street or The Fine Line. The magic (and questionable fashion) of the 80s was alive and well at the Xcel Energy Center.

Opening up the evening, with a coveted slot, was Chewelah, Washington based soul artist Allen Stone. At a ripe 30 years old this is one hell of a gig to snag. Stone played a short but sweet four song set complete with an Aretha Franklin cover. Though Stone’s time on the massive Xcel stage was short, he undoubtedly gained some new fans with his soulful, R&B inspired tunes. 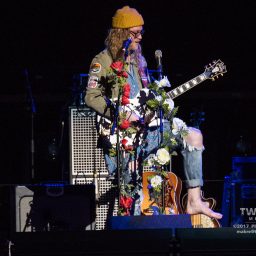 Co-headliners Tears for Fears took to the stage with true rockstar presence around 7:30 pm. “Wait, are Tears for Fears British??” I texted my mom as frontmen Roland Orzabal and Curt Smith chatted with the nearly sold out Xcel. She quickly corrected me my arrogance. Trying to blend in and play it cool with the baby boomers I was surrounded by I sat back and watched one of the greatest new-wave bands of this generation. I was surprised with how many songs I actually recognized from their set without evening knowing before that it was TFF. In so many of my other reviews for Twin Cities Media I talk about the 80s-influence many of my favorite bands draw upon. Tears for Fears is what I am talking about. The influence of their synth-driven sound on many of the biggest bands of my generation was evident in a way that felt like a slap in the face. Everything cool I think a band is doing today, is probably influenced by TFF whether intentionally or not (my acid wash jean jacket from Ragstock I also probably have TFF to thank for).

Tears For Fears had the Xcel on their feet of the majority of their set, which included classics such as “Mad World,” “Pale Shelter” and “Memories Fade.” TFF even played a cover of Radiohead’s “Creep” and absolutely did it justice. Smith talked about getting coffee at Dunn Brothers on Thursday morning and the barista saying how excited she was to see Tears For Fears tonight, not realizing who Smith and Orzabal were (probably an ignorant millennial like myself). Smith said he replied to the barista, “they suck!” He went on to apologize and promise not to suck tonight (which they didn’t by the way). If your Tears for Fears and can have that sense of humor with a barista at Dunn Brothers, I think that ought to be a lesson to all of us to not take ourselves too seriously. After closing the set with “Head Over Heals,” TFF gave the Xcel a hell of an encore with “Shout” to close out their set.

As the stage was flipped for Hall & Oates, moms and dads made their way up the stairs for more $11 beers, and I again, sat basking in the glory of what it must be like to play a massive stadium like the Xcel Energy Center. From nights with shitty lights and questionable sound systems, the polished, perfectly lighted Xcel Energy Center was a bit of a departure from my normal evenings. Daryl Hall and John Oates hit the stage shortly around 9:00 pm and once again had the Xcel Energy Center on their feet. They opened their set with “Adult Education,” “Maneater” and “Out of Touch,” which by the way, is still a banger. After “Out of Touch,” Hall & Oates slowed things down a bit “Say It Isn’t So,” “One on One,” “Wait for Me,” “She’s Gone” and “Sara Smile.” Both Hall & Oates seemed to have that wide-eye wonder of playing a stage like this, which again is saying something for guys who are 70 and 69 respectively. They’ve been playing music for over 45 years and still seem genuinely blown away when the house lights come up and they see a packed stadium.

The women in front of me snapped pictures on her digital camera the entire show (yes, as in like a digital camera, not an iPhone, but one of those little cameras you use to take everywhere in 2005). I watched a girl about my age try to fake knowing the lyrics to some of the songs. I watched a guy play air drums like it was 1981 all over again.

Hall & Oates pulled out some of the deep cuts including “Possession Obsession,” before picking things back up for some of the major hits “I Can’t Go For That” and “You Make My Dreams,” which was of course the perfect ending to their set. And you know these guys have to do an encore – it’s Daryl Hall and John Oates for god’s sake. Encore included “Rich Girl,” “Kiss on My List” and “Private Eyes.”

With “Out of Touch” officially stuck in my head, I made my way pack to my car to pay by $15 parking and strategically avoid the inebriated folks fumbling with their phones to find their Uber. “I’m in the red shirt!!!” a guy yelled into his phone. Last night, though a major departure from my normal evening of music, was one hell of an upgrade. Sure I didn’t know Tears for Fears were British (no hate mail please), but I count myself a pretty damn lucky 25-year-old for getting to witness the greatness of Hall & Oates and Tears For Fears.

The pressure on Lucy Dacus for her second album “Historian” must have been immense. After all her debut record got all kinds of critical acclaim, one news story had 20 record labels fighting over her, […]

Band of Horses at the State Theatre

The Dress Code for Saturday’s Band of Horses Concert at the State Theatre simply read: Beards – Wild Belle’s Natalie Bergman got a special dispensation. Band of Horses’ tour promoting their current album “Why Are […]