In the years since Steve Earle release his first EP in 1982 he has become an American institution in all things Americana. His music spans across the genre and his songs have been recorded by a number of other artists including Johnny Cash. His tour in support his latest album “Terraplane” included a stop at the Pantages Theater on Saturday.

Opening were Earle’s band members husband & wife duo “The Mastersons” whose 30 minute set was well delivered and included some of the wisest word I have heard from artists. “While the Dollars from the merchandise table to not define musical success, they do decide what’s for fucking dinner tomorrow night” and good advice from Chris Masterson “Never cross a redhead!” 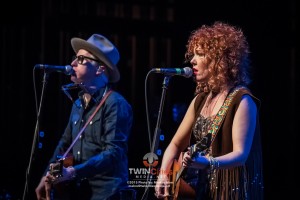 Steve Earle’s set was well delivered. He is the classic American Blues Man and it showed in many of the numbers but he did not neglect his other roots. He talked about the high standards any blues album made in Texas is being held and some of his influences. He showed his rock side with the crowd favorite Copperhead Road. It would not have been a genuine Steve Earle show without some social and political commentary. His set started with only brief breaks between songs but once he got warmed up he shared his humor and his views on politics, Bernie Sanders and other topics.  Overall his show was exactly what the audience had come to see. I for one enjoyed the set and seeing and American classic live.
Set List: (pending confirmation)
Baby Baby Baby (Baby)
You’re the Best Lover That I Ever Had
Ain’t Nobody’s Daddy Now
Baby’s Just as Mean as Me
My Old Friend the Blues
Someday
Guitar Town
Copperhead Road
Goodbye
Sparkle and Shine
The Galway Girl
South Nashville Blues
CCKMP
Forty Four
The usual Time
That All You Got?
Go Go Boots Are Back
Better Off Alone
The Tennessee Kid
King of the Blues

As the weather starts to change throughout Minnesota, the temp is certainly heating up in the local country rock music scene. Neisen’s Sports Bar & Grill in Savage, MN was the place to be Saturday […]

Nothing More Tear Up Sold Out Skyway Theatre

To almost no one’s surprise at this point in winter this year, Minnesota started off March with another snowstorm, which made me honestly want to skip this month entirely. However, knowing that there are a […]