As I walked into the Fine Line Music Cafe last night, I was greeted a wild mix of music fans. That should not have some as a surprise to me as 2 local bands share the stage with the legendary Shonen Knife. For someone who enjoys people watching (and what photographer isn’t) , this was a treasure trove. Life is enriched by colorful characters, I am observing not judging. The guy proudly sporting his Iron Maiden tour shirt, the gentleman in a beige suit and hat handing over his card to the woman at the merch booth on his flat hands with a bow (as it is done in Japan), the pink pony tails and school girl outfit combo complete with Doc Marteens. Some family that clearly had come to see the openers and stood out from the rest of the crowd. The huge variety of shirts from different bands. It was simply fun to observe. But I digress, I was there for the music……..

Minneapolis’ Black Widows instantly won my heart when the bass line to “Peter Gunn” throbbed from stage as their first song. They describe their sound as surf-roxotica (complete with go go dancers according to their web site). And yes there definitely was a surf rock vibe to their sound, but with an edge. If this was a movie, those handsome surfers on their boards had spiked hair, piercings, and tattoos. One song was about a cannibalistic (did I hear that right?), cannabis smoking stripper. Another was dedicated to Donald Trump, I give you a hint, it was the 4th one. All in all, this is a fun band that I would love to catch again.
Set List: Peter Gunn / Scam Likely / Helen Killer / Baby Boy / Mattie Mae / Kandi Korn / Mummy Mama / Walk Don’t Run

I had seen Kitten Forever a couple of years ago, on a night when I showed up at the venue pissed off and my mood did not get better as the night went on. Needless to say, I did not get them. Last night, the penny dropped. The band members don’t give a damn about what’s expected of them. Mic? Who needs a mic? We’ll sing into an old telephone! Who’s on drums? Who’s on bass? Who cares, we’ll switch instruments mid song! Guitars? We don’t need no steenking guitars!
But what seemed like a free for all on stage, really worked well. It reminded me of punk bands in the early days of the genre and they left it all on stage.

Hard to believe but Shonen Knife are coming up on 40 years as a band. And continue to win new fans. That was clear looking at the age difference in the crowd. In that time they release 19 albums, the latest “Sweet Candy Power” just this June. Currently touring as a trio loud cheers greeted them as they took the stage. “Konnichiwa” was fittingly the first song. This is the most politie punk / rock band I have ever encountered. The audience was thanked after each song, and when it was time to clap along with the beat the audience was “asked for their cooperation”. I had to smile at that, I’m used to being told “to get those f’ing hands in the air”. As everyone knows Shonen Knife have a unique style and I enjoyed watching their set and hearing their classic and new songs.
Set List – I give up, you go figure it out 🙂 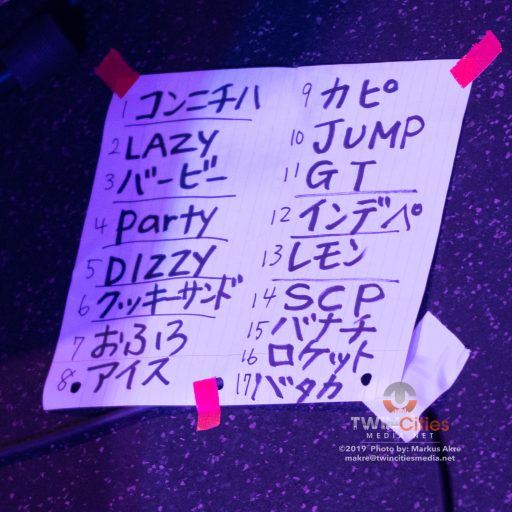 Friday evening saw the debut of the Surly Brewery as a outdoors concert venue. After the success of Brewfest last summer I was looking forward to see how they would do with a more music […]

The Sunny Era brave the cold, release “Save yourself from you” at the Entry

It takes hearty bands and fans to come out for a show on the first night of zero degree temps of the season. Fortunately for all involved First Avenue’s Entry had just 3 such band […]

Two tours converged on Minneapolis last night and combined to make one of the best, if not the best line-ups of the year. You had the heavy hitting tour of Sum 41, The Amity Affliction […]