I am firm believer in kicking off the weekend on the right foot, so knowing that Leo Presents was promoting a tour stop of Within The Ruins at The Cabooze … well, plans were firmly set. With commitments during the day extending into the evening, I was a little late geeting to the venue and unfortunately missed local/near local favorites Conundrum, Nomad, Common Choir, and Terraform. I will be definitely keeping an eye out for next their performances. 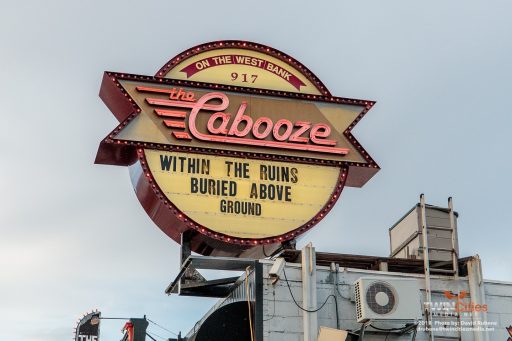 As I walked into The Cabooze, Soulkeeper was just kicking off their set. This bands is hardcore, emotionally driven metal to the core. While the set was short, it did not compromise one bit on quality. Raw, edgy, and distinct, these guys handled the stage and kept the crowd energized. Guitarist Scott Gilmore fully mastered the melodic progression on the 8-string guitar … very impressive.

Sentinels were up next. Direct out of New Jersey, the Sentinels hit the stage with that East Coast power. Frontman Joe Benducci powered through the set with ease while maintaining a uniquely driven progressive metal sound. Even at one point, drummer Dave Rucki belted out some great backing vocals.

With the crowd fully energized and ready to go, everyone knew who was up next. After a quick stage change, the lights dimmed, and Buried Above Ground hit the stage. And hit it they did. Being a local favorite, Buried Above Ground seamlessly delivered an impressive performance. Maybe it was the loud powerful drive of DJ Gunnarson (guitar), Coz (bass), or Matt Grozdanich (drums). It may have been the unleashed raging animal vocals of frontman Eric McMahon. Actually though, it is was the raw collective energy that is combined  when these guys perform. During a past interview with the Buried Above Ground, I referred to there music as “getting hit in the face and then turning and getting hit repeatedly” … so hard, forceful, and with unrelenting power. Their set was crazy, but at the end, the only thing crowd wanted … MORE!

Within The Ruins was up next to headline the evening and kick everyone into the weekend. The band took the stage with hard hitting force. Frontman Steve Tinnon quickly had the crowd firmly in his grasp and delivered song after song with that consistent attitude and drive. Their impressive light show, insane vocals, and energetic stage performance got the entire crowd moshing. Since band got their start many years ago, these hard-hitting Massachusetts metalheads had a great selection of song for their set. Within The Ruins performance was hard, rocking, and down right dirty and left everyone satisfied at the end of the night.

With my ears ringing and slightly a little more deaf, I made my way out The Cabooze along with fellow metalheads. I am always impressed that there are so many parallels between what the current metal scene represents and the metal I grew up on … and ultimately seeing a great show to kick-off the weekend.

The Blue Stones Are NOT A Pop Band

On a cold Thursday night in St. Paul, there was only one thing to do: make my way to the Turf Club to see the Canadian native rock duo The Blue Stones accompanied by also […]

Kentucky band Cage the Elephant has been a favorite of alternative and rock stations. Their stop in the Twin Cities has been highly anticipated and the only reason their show did not sell out instantly was […]

Jumping Into The Unknown Pays Off Thanks To Greyson Chance

I’m a risk taker when it comes to my weekday shows. I really don’t care what I see or if I know it prior to going, I just want– no, need– a show every day […]