If you were looking for a cathartic, fast and heavy release of energy, you were sure to find it in St. Paul last night as The Paranoyds, The Dirty Nil and White Reaper lit up a crowded Amsterdam Bar and Hall. The sweat was abundant, as all bands played breakneck, no nonsense sets full of plenty of fun and moshing. It’s no doubt that Saturday’s show was a special one, as it’s not too often you get three bands on the same bill perfectly matched for each other blending harmoniously across all fanbases. Everyone was digging the vibe, as each band came out swinging with plenty of punches creating the perfect piece of punk rock heaven.

The Paranoyds opened up the evening’s events with an exceptionally vibrant set. Having not been familiar with The Paranoyds before seeing them live, I was intrigued and captivated by their stage presence. They delivered a heavy dose of California punk rock, commanding the stage with messy hair, black boots and fierce vocals. What was most engrossing was how every member of the band was just as equally entertaining to watch as the next. The bassist and guitarist would walk around the stage, switching spots, sharing vocals, and singing into different mics. The keyboardist was positioned front and center and would sing and hammer away on her keys. I would have enjoyed seeing them play a longer set, as they certainly left the crowd (and myself) yearning for more. 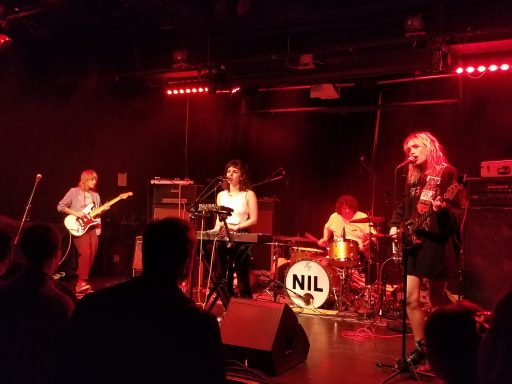 Next up was the high energy trio from Dundas, Ontario — The Dirty Nil. It’s no secret that The Dirty Nil are one of my favorite bands going right now, so I was absolutely stoked to see their set ahead of White Reaper. When the stage turned over after The Paranoyds and The Nil’s equipment was brought to the stage, everyone took one huge step forward and packed it in. There was no more open space between people standing in the crowd. It was about to get wild.

The Nil came out and opened with “Always High”, one of their melodic tracks off Master Volume. The crowd immediately lit up, dancing and singing, rushing to the non-barricaded stage. Lead singer Luke Bentham hopped around, spontaneously dropping into an ankle breaking positions as he suavely blew bright pink Hubba-Bubba bubblegum bubbles while whaling on his guitar. The crowd ignited every time he came up to sing and shred in front of the fans. Those in front got as close as they could, moshing and screaming the words back in Bentham’s face. Bassist Ross Miller was full of contagious energy, kicking around the stage, fist bumping fans in the first row and nodding along with everyone singing the words. Drummer Kyle “Starchild” Fisher, as dubbed by Bentham, during the set got a roaring applause, as the crowd broke into a chant of “Kyle! Kyle! Kyle!”

They played a steady mix of songs from across their entire discography, including the two new tracks released on the deluxe edition of Master Volume. Once again, The Dirty Nil delivered a high energy, no-bullshit rock and roll set showcasing their unparalleled talent of being a great live band. It was all smiles as the band left the stage, with some people in the crowd chanting, “One more song! One more song!” If only they could have delivered… 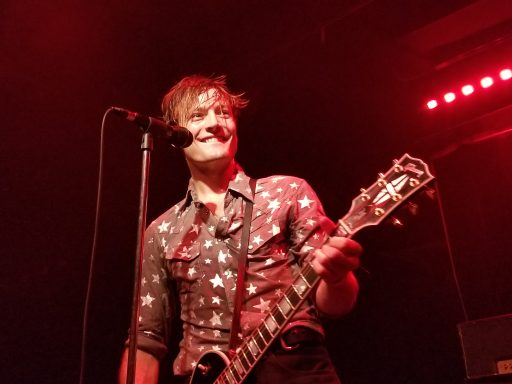 However, the high energy moshing was not about to stop anytime soon as White Reaper were up next. Delivering fast, exuberant garage punk, Louisville, Kentucky based White Reaper have been making waves with their latest single “Might Be Right.” Much like the sets that preceded them, White Reaper’s set was full of plenty of dancing, singing and moshing. In waves, people started climbing the stage and jumping off into the crowd, surfing all across the floor of the Amsterdam.

From the beginning of their set to the end, it was nothing but unhinged fun. White Reaper jumped around on the stage, pumping up the crowd and making people move. As the set was nearing its close, lead singer Tony Esposito asked the crowd, “So what song do you want to hear? Any song.” After jamming the first 30 seconds of a few covers such as “Sugar We’re Going Down” and “Smells Like Teen Spirit”, the crowd started chanting for Smash Mouth’s “All Star”, to which Esposito joked, “All Star? We don’t know how to play that one.” They ended up playing half the song anyway, with the crowd doing the grunt work of singing the entire beginning and chorus. They then broke into a cover of the Hives’ “Walk Idiot Walk” which the band claims they had never played before. The cover was exceptional, and many people in the audience knew the words and started screaming along with the band.

Basically, if you were not at The Amsterdam Saturday night, you missed one of the most electric, high energy shows of the year. Each band showcased why they are some of the most talented and fun groups to watch, and I do hope they will all swing back around and come to the Twin Cities again soon. 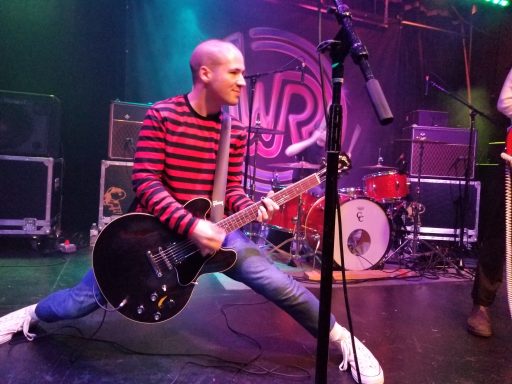 Atmosphere brings Minnesota’s finest “Back Home to You”

Atmosphere playing a show at the Palace Theatre feels like a holiday tradition itself at this point. Decorate your tree, bake some cookies, head to St. Paul to see Minnesota’s finest perform to a sold […]

In their almost 20 years as a band, Indiana’s Umphrey’s McGee has performed over 100 shows each year and amassed a staggering catalogue. How staggering? Enough to play First Avenue 3 nights in a row, […]