Vans Warped Tour, one of the longest running festivals in the music scene, made a stop at Canterbury Park in Shakopee yesterday. Warped Tour is widely known for its huge, diverse crowds, abundance of charities and organizations, and of course nonstop music throughout the day, and all of these expectations were not only met, but exceeded.d. 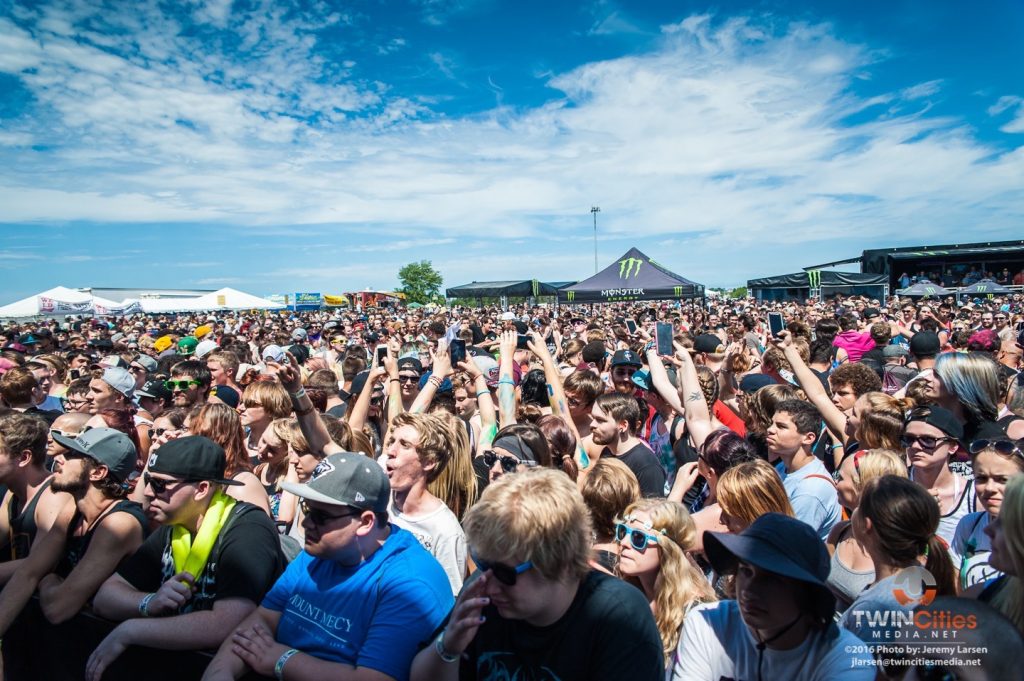 Although doors opened at 11, the line was hundreds of people deep well before 9AM and security was already hard at work checking bags and getting the masses organized. A group of middle school aged girls huddled together in their fresh and clean band tees, taking selfies and pointing in awe at the slew of tour buses parked to both sides of their spot in line. Just a few feet behind them, some punk parents talked to their 7 year old daughter and prepared her for her first Warped Tour experience. With a high five and a huge grin, they recollected, “We saw New Found Glory play a tiny stage at Warped in 1999, and now we get to see them play the biggest stage. We’re fuckin’ stoked!! And we get to bring our daughter for free and show her how much dope music there is out here. Hell yeah!” The line most definitely moved slow as doors finally opened, but there was still a pleasant air of excitement radiating from the crowd. 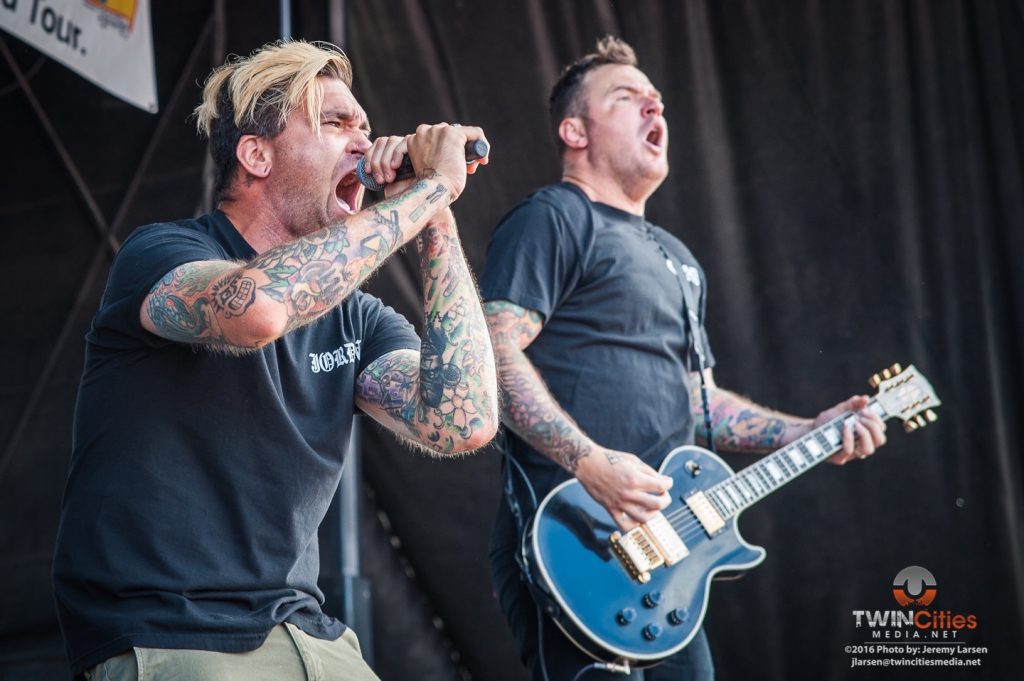 Once they passed security and had their tickets scanned, Warped Tour goers entered the venue to be immediately surrounded by merch tents and organizations giving out free swag. Each tent was staffed by a few edgy workers who were there to either sell you your favorite new t-shirt or give you some stickers or a drawstring bag. Free stuff has always been almost assured at Warped Tour. “We come with empty backpacks and leave with them full. You don’t even have to bring the bag, I just got a free one from the Journeys tent for throwing a ping pong ball into a shoe,” one lime green haired teen explained between puffs on his vape. But it wasn’t all just mindless free stuff.  The masses were drawn to the big orange Truth truck to play crazy games in order to win socks, shirts, leggings, and even skate decks. The best part? Each item they give away has a fact about the effects of tobacco usage subtly placed somewhere. 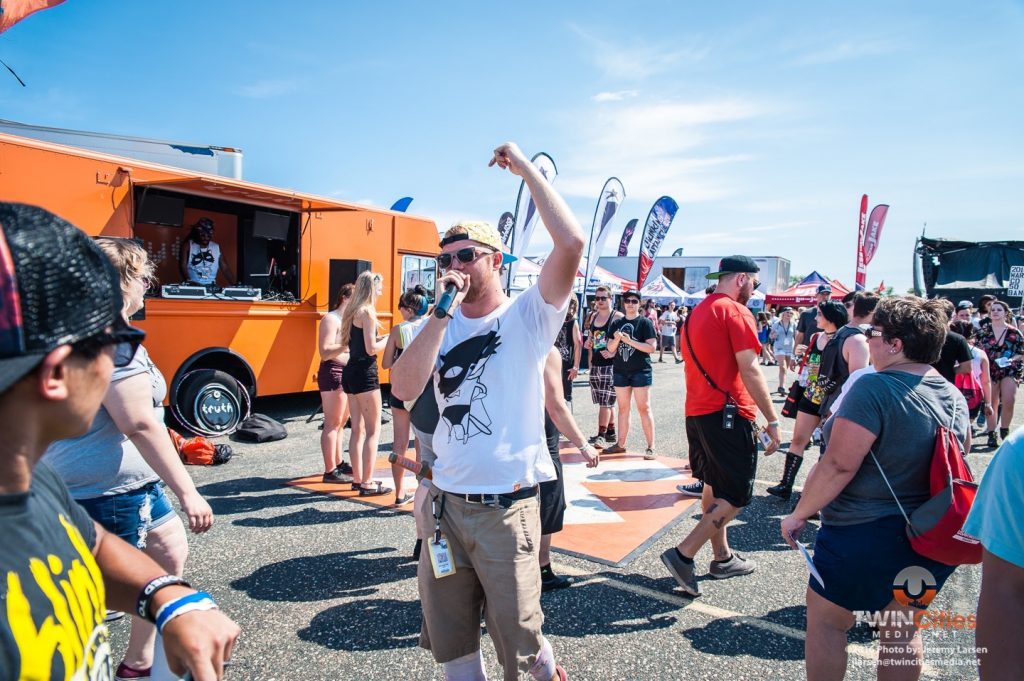 People don’t just arrive right at 11 to fill their bags, though. Music starts right away at Warped Tour. The live music schedule, which changes every stop of the tour, is posted on a giant inflatable where each half hour of the day is mapped out by stage and performer. Nearly everyone rushed to take iPhone photos of the schedule for the day so they could plan to pack in seeing as many bands as possible before the whole event ended at 9PM. The stages were spaced out just far enough so that almost every stage had a performance happening at all times. Bands that had headlined years ago but had taken some time away from the scene like The Maine and We The Kings started the day off strong, paving the way for even more throwback performances later in the evening. At 3PM, Yellowcard took the stage with a set ending with their 2003 mega hit “Ocean Avenue.” This being their second to last tour brought on a huge crowd. Yellowcard’s set was the beginning of back to back nostalgic throwback performances for 4 hours. 3oh!3 came on next with a nearly even mix of new songs and oldies, with hips shaking to “Chokechain” and “My First Kiss.” Good Charlotte most definitely took the crown for crowd participation with “I Just Wanna Live” being belted out in falsetto by thousands. Finally, New Found Glory and Sum 41 finished up the glorious string of early 2000s goodness. NFG’s “Catalyst” and Sum 41’s “Fat Lip” had everybody in the audience jumping and head banging. 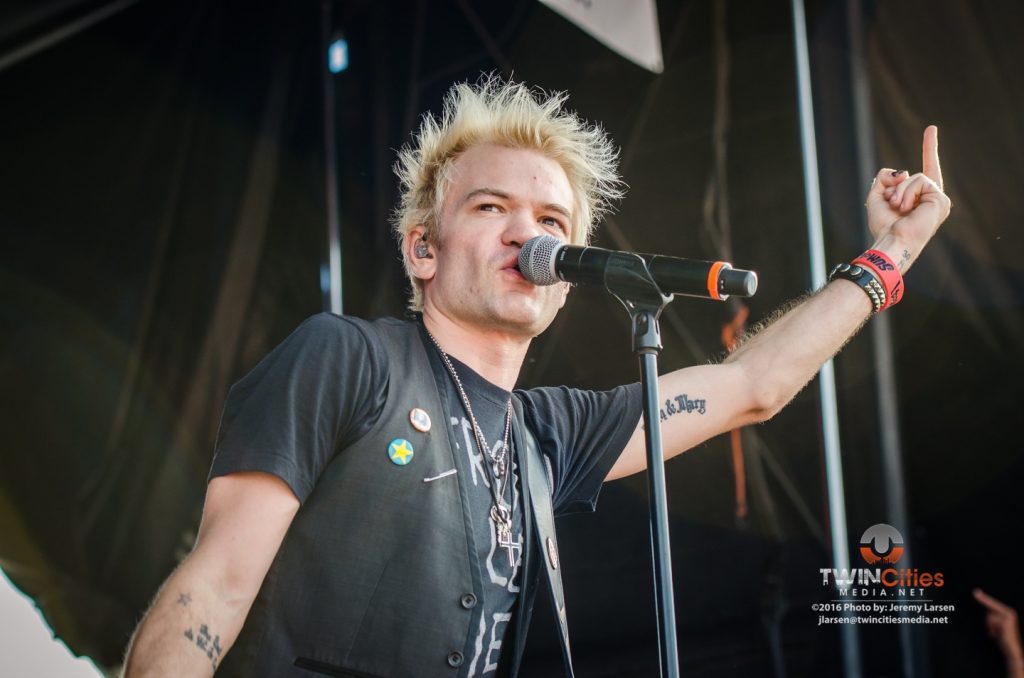 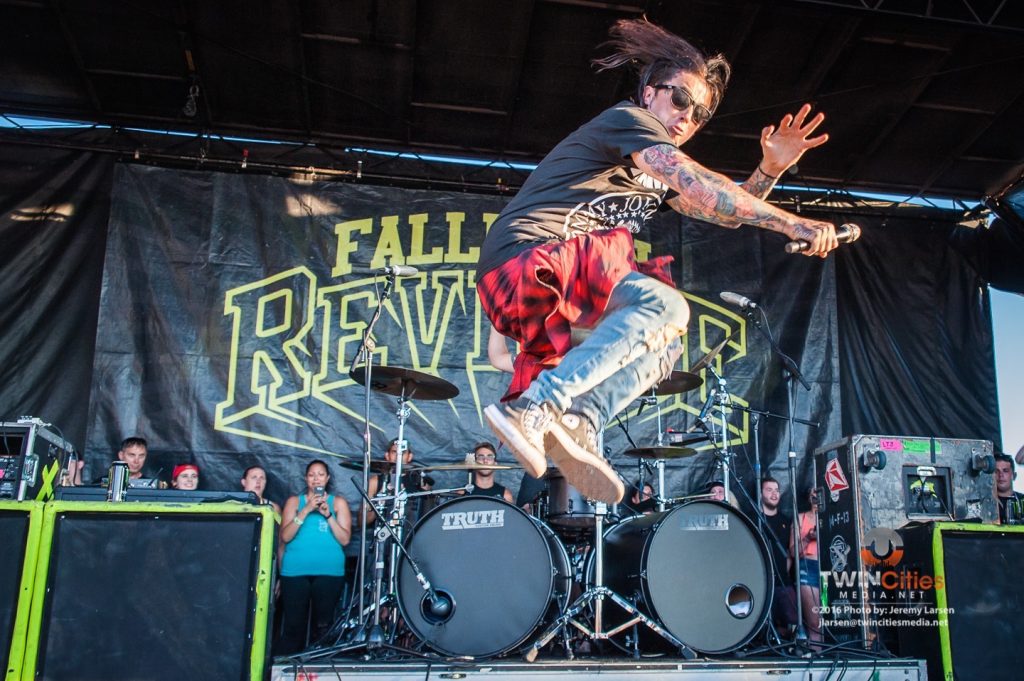 As the masses filed out of the same doors they walked in nearly 12 hours earlier, the feeling of excitement had changed into a blanket of exhaustion. Even through the tiredness, nearly everyone was talking fast, reliving their favorite moments of the day with anyone who would listen. And finally, with sunburned faces and dying cell phones, Vans Warped Tour came to an end.

I’m still recovering from Riot Fest. It was a long yet amazing weekend in Chicago surrounded by the best of friends while watching some of the best of bands. Everything about it was perfect so […]

California band Dirty Heads last time in the Twin Cities fought off rain at Cabooze Plaza. This time around they faced a more powerful force – Minnesota Winter! (or the first hint of it).  Florida […]