Prince is God in Minnesota but hip-hop is a very close second! – Metasota

The local hip-hop community came out by the masses last night in order to support resident partyboy Prof’s homecoming. It was a night that will be remembered by many and a night that truly showed to power of the local hip-hop scene that I have come to love. Last night was the final night of Prof’s Time Bomb Tour and there was no better place to hold the show than Minneapolis’ own, First Avenue.

As the sold out crowd filed in, they were greeted by the DJ skills of Willie Wonka who would later be the DJ for Prof. Willie was a charismatic young man with enough energy and personality to make me forget the fact that I’m not a huge fan of watching DJ’s. Typically I get bored when watching someone just standing behind a computer but Willie came out from behind his post multiple times with a smile on his face and dance moves that were nothing short of contagious. 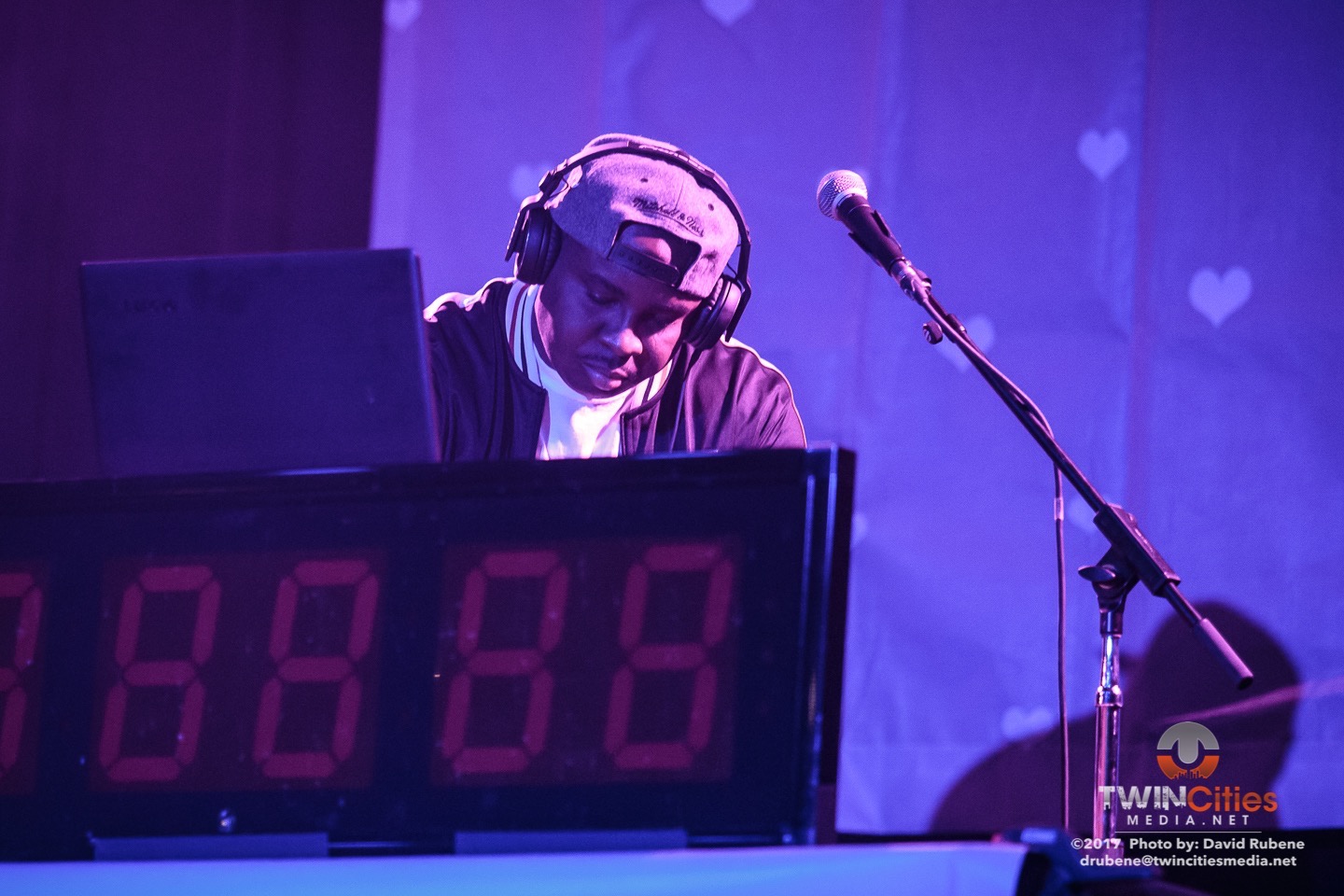 After an hour of warming up the crowd, it was time for the first rapper of the night, Cashinova. Hailing from Saint Paul, Cashinova seemed to cash in on his Asian heritage as he blasted through a quick twenty minute set. His brand of rap had a more unfinished sound than the rest of the night but I don’t mean that as it was amateur or anything. It was truly just a much more raw sound than what was to come and that made him stand out during the show. It is also what continues to make him stand out in this scene. Although his set was short, it was not ignored and Cashinova showed just how quickly he is moving up the local hip-hop ladder.

Finding Novyon is another local who has already climbed that ladder and, if you ask me, is currently one of the many reigning kings of the scene. Last night was my first time seeing Finding Novyon live but I had heard and seen his name on some amazing line-ups these past couple of months. He took the stage with his service dog “Burberry Terry” (okay, it was just one of those silly purses in the shape of a plush dog) and truly got the crowd moving. When he brought out friend and fellow rapper, Allan Kingdom, the crowd lost it and turned into a sea of electricity and would stay that way throughout the night. Like all of the other acts that performed last night, Finding Novyon was charismatic and personable. He wasn’t afraid to interact with the crowd and, because of that, the crowd wasn’t afraid to interact with him.

DJing for Finding Novyon was Metasota. Normally Metasota isn’t his DJ but, as Finding Novyon explained, there wasn’t enough room in the van for each artist on this tour to bring their own DJ’s so that had to improvise. Had they not said anything, I wouldn’t have known that Finding Novyon and Metasota didn’t regularly perform together. The duo was a force to be reckoned with and, even when they switched spots and Metasota was front and center with Finding Novyon behind the DJ booth, they proved that these two are some of the front runners in the ever growing local hip-hop scene.

Although Metasota was introduced to the crowd as Finding Novyon’s temporary DJ, as soon as he got front and center, it was clear that he was made for the limelight. He had a sense of power to him that could give you chills. After reading up on Metasota a bit this morning, I came to find out that he started as a battle rapper and that definitely comes through in his music. I think that’s where the sense of power comes from but, even with the power, instead of the aggression you would expect from a battle rapper, you are greeted with a true passion for the art.  Finishing off the already amazing night was local hero, Prof. This guy literally exploded onto stage with the bang of cheap confetti guns and more energy than I could possibly put into words. Backed by opening act Willie Wonka behind the DJ booth, Prof easily commanded the crowd from the first word he said to the final thank you. It was one of those sets where, even if you had no clue who Prof is or didn’t even like hip-hop music, you were unable to stand still. You just had to dance around, bob your head, whatever… you had to move and that is the magic of seeing a Prof show. The crowd sang and cheered throughout the set and even set the record for the loudest crowd First Avenue has ever had (116 decibels!). Prof was the first to admit that, without the crowd, he probably would not be where he is today but, the crowd seemed to be just as (if not more) appreciative of the fact that even with his fame, Prof has not forgotten the little people in the Twin Cities.

The reason I love Prof so much (beyond his live show) is his personality that shines like the brightest light you have ever seen. Although I’ve only met him in passing with a quick hand shake or high-five, his smile is contagious and his energy is that of true positivity. Even playing in front of a sold out crowd at First Avenue, there’s no denying that this guy comes off as that best friend you had growing up. He seems approachable, friendly, and down to earth.

Prof played through his hour set and followed that up with a two song encore.  Prof played a variety of songs that showed off just how versatile he is. He apologized before playing “Hotel Room” just in case his voice cracked during some of the higher notes due to just getting over being sick. The apology ended up being unnecessary as Prof nailed every single note in the vocally treacherous song. It didn’t matter if he was playing a slower ballad about sleeping with a stranger in a hotel room or one of his upbeat songs that showed off his narcissistic side, Prof completely nailed every single song he play last night and had the crowd in the palm of his hand.

Prof’s last song had him doing his signature move of crowd surfing through the crowd in a giant raft as he flung confetti out at the crowd. Sure, he does it every single time and you know that’s it coming but it doesn’t take the excitement away at all. As he and Willie Wonka tried to point the crowd into the direction they wanted to go in, the crowd did their best to oblige and safely got the performers back up to the stage.

The night ended in thank you’s. I think I heard Prof say “thank you” no less than fifty times throughout the night. The participants in the lengthy tour definitely came home with their share of bumps and bruises. With a couple van breakdowns here, a couple of illnesses there, and a van break-in in Santa Cruz that left the musicians with literally next to nothing, nobody gave up. After being through hell and back, these guys still came home to Minneapolis and gave us the show that we all wanted and that we needed.

The local hip-hop community showed their teeth last night and I’m still trying to figure out how the hell I ended up getting involved in such a truly beautiful scene.

Sir Sly Is Slick At The Fine Line For A GoShow

My introduction to Sir Sly’s music is probably similar to many other alt radio station listeners. In the summer of 2017 there suddenly was this song that sounded both familiar and very different at the […]

Fitz And The Tantrums Get The Crowd Clapping At First Avenue

Usually I live by an adage I fondly heard on an episode of Broad City a few years ago: phone, keys, wallet. It’s something I actually say aloud to myself before I leave my house […]