UK band The Strut’s first appearance at Minneapolis’ First Avenue was a memorable one. The 4 piece band is riding high their current album “Everybody wants” and they just released an EP titled “Have you heard”. They were in high demand at pretty much every radio station in the Twin Cities during their one day stay. The band is made up of
Luke Spiller – lead vocals
Adam Slack – lead guitar, backing vocals
Jed Elliott – bass, backing vocals
Gethin Davies – drums and percussion

Their set started “Happy Flight” from the Neverending Story soundtrack bringing knowing smiles to their older audience and confused looks to some of their younger fans. From the moment lead singer Luke Spiller took the stage the action was nonstop. Band member stood at the edge of the stage to rile up the crowd, there was serious strutting and the whole place traveled back in to time to the 70s to a Glam Rock show that would have made the Sweet take note. 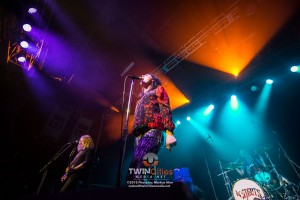 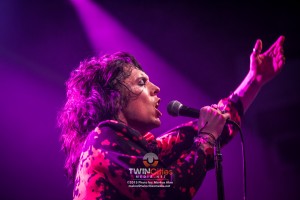 Spiller said, he was suffering from some vocal problems and in true Rock’n Roll fashion declared: “I’ll blow my fucking voice box for you!” Problems or not, he gave an impressive performance. The other band members were no slouches either, engaging the crowd and earning their fair share of screams of delight. Spiller walked out into the crowd for one song and just in case fans got to hot doused them with Champagne from the stage. 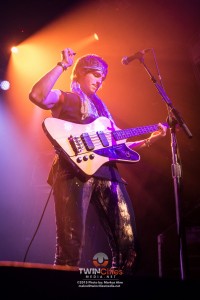 Overall this was one of the most fun shows I have seen in a while and I will be there when the Struts come back!

Set List:
Roll Up
Could Have Been Me
Kiss This
She Makes Me Feel
Let’s Make This Happen Tonight
Dirty Sexy Money
Put Your Money on Me
Encore:
Where Did She Go

Sunday night, at the Mystic Lake Showroom Buddy Guy and Mavis Staples double headlined. Both are Chicago based, born in Mississippi. As Mavis put it “we’re homies, we’re meant to be here”. Buddy Guy and […]