To say that I was looking forward to seeing the Psychedelic Furs last night at First Avenue would be a very British understatement. Their music was on my Walkman on long walks through Austrian, Swiss and Caribbean towns and the soundtrack to a couple of teenage love affairs back in the 80s.

When I arrived at First Avenue it was already pretty full and fans were ready to see opener Robyn Hitchcock while enjoying DJ Jake Rudh’s expertly picked playlist. 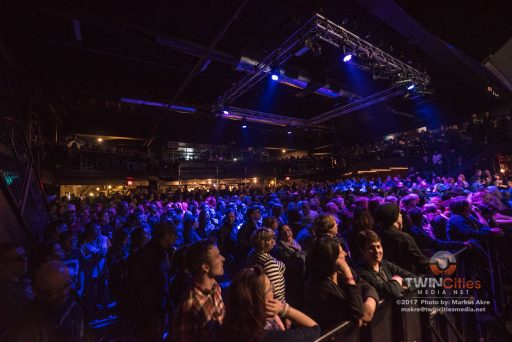 Hitchcock’s setup was simple, just he and his guitar but that’s where simple stopped. Hitchcock is an artist who commands attention. His music, his lyrics, his banter between songs draw in the audience. There are songs about the ghost of his dead wife, there are off the cuff jokes between songs, a song about his relationship to religion. At 64 he can still hold a note quite well. After his show, he spent some time in the merch booth signing autographs and his new self-titled album and drew a lot of fans. Hitchcock wasn’t on my radar growing up but has been an iconic icon to many. Want an example? I ran into Jake Rudh while taking pictures upstairs and chatted for a minute with him. Suddenly he perks up to a new song yells “Oh shit! That’s one of my favorites” and runs back to the DJ booth – having seen Hitchcock live, I’ll happily take second place to him.

The Psychedelic Furs took the stage after short synthy intro. The band is celebrating its 40th anniversary this year (if you are counting their 10-year hiatus) but the energy they bring to the stage rivals a teenage band hopped up on Red Bull. Led by singer Richard Butler and his brother Tim Butler on bass the front 4 of this band are magnetic showmen. The pit at First Ave prevented them from the handshakes so frequent at their last show at the State Theatre but they were giving fans their all. They even managed to distract me from getting my customary shot of the drummer.

The Psychedelic Furs haven’t put out a new album since 1991’s “World Outside” but none of their fans seemed to care. The band managed to preserve a moment in time when life was simpler, who was going to the prom with us was the biggest worry we had, and we knew how to party. They took the audience to that moment and held them there for their entire set. And that my friends, is something not many artists can do. I for one was photographing in the pit, singing along, with a shit eating grin on my face.

Set List: Dumb Waiters / Heartbeat / The Ghost in You / So Run Down / Heaven / No Tears / Believe / Alice’s House / Love My Way / Angels Don’t Cry / All of the Law / Mr. Jones / All That Money Wants / House / Pretty in Pink Encore: President Gas / Heartbreak Beat

Photos by David Rubene and Matt Kennedy   What started off 4 years ago as a simple backyard party, has truly blossomed in into an all out event. Freedom Fest 2016 featured a seven great […]

Lacey Sturm Lights Up The Cabooze with a Captivating Performance

Saturday evening started off in style with a head banging good time at The Cabooze in Minneapolis. With four bands on the marquee, Letters From The Fire, Stitched Up Heart, Palisades, and headliner Lacey Sturm, […]

Beloved Lucinda Williams For Two Shows at The Fitzgerald Theater, April 13 and 14