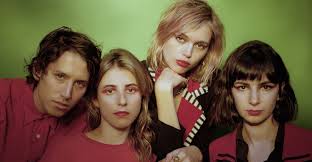 LA rockers The Paranoyds will bring their sonic attack to the 7th Street Entry on Sunday, Feb 9th.

Los Angeles lives under the constant gaze of the Western world, and its denizens are just as apt to view their lives through that same digital lens. It’s a panopticon, a chamber of mirrors. And it’s in this city of sunshine and surveillance that punk quartet The Paranoyds channeled their revelry and revulsion into their debut album Carnage Bargain—a raucous blend of garage rock grit, new wave swagger, classic horror film soundtrack campiness, and a myriad of other left-of-center influences.

It’s ironic that the band’s moniker winds up being an apt summary of the band’s general outlook on technology and modern culture given that The Paranoyds’ humble beginnings can be traced back to a friendship forged between Staz Lindes (bass/vocals) and Laila Hashemi (keys/vocals) over Myspace in their early teens. Bonded by a shared interest in local underground music, the pair eventually moved their online friendship into the real world. Laila’s childhood friend Lexi was brought into the fold and the first vestiges of The Paranoyds began to take shape.

Being well north of the halfway point of the lifespan of the average male, in my mind I inhabit a faraway kingdom where rock is king. Of course, those days are long gone, yet there […]

If you were looking for a cathartic, fast and heavy release of energy, you were sure to find it in St. Paul last night as The Paranoyds, The Dirty Nil and White Reaper lit up […]