Saturday night, Welsh trio The Joy Formidable whisked the good people of Minneapolis off the cold, dark streets and into their warm, dreamy realm at The Fine Line Theater. This show was exactly the kind of thing to break up the monotony of negative temperatures and dreary snow, as the two bands preforming showcased fun, jocundity, and tenderness. A night indie-punk fans shouldn’t have missed.

Kicking the night off were Boston based Twen. Those who showed up early for Twen’s set were not disappointed, as the dynamic punk duo put on an energetic set with a fun and distinctive energy. Band members Jane and Ian seemed to have a great chemistry, welcoming the chance to win over those not familiar with the pair. They rocked and perfectly warmed up the crowd before The Joy Formidable.

While the stage changed over to get ready for TJF, more and more people started rolling into the Fine Line. People slowly started packing it into the front, eager to see the Welsh trio. The band came out and took the crowd on a sonic journey. If I could use one word to describe it, it would be heavy.

“We’re celebrating the 10 year anniversary of our first EP (A Balloon Called Moaning).” Lead singer Ritzy Bryan said shortly into the set. The crowd cheered in delight. “So we’re going to be playing all eight songs from that album for you.” The band swiftly rolled though the tracks, one by one pausing in between songs to adjust faulty chords, tune up, and get a little bit nostalgic with some storytelling and gratitude. Before “While the Files”, Bryan took some time to engage with the crowd and admire the smiling faces beaming back up at her as the houselights illuminated the floor. “This song was written ten years ago… and it’s taken on a different meaning from when we first wrote it.” Bryan said. “Why?” Someone in the audience question. “Well it was written when we weren’t as cynical about finding true love.” Bryan coyly joked.

The Joy Formidable were heavy, ambient, and precise. Up on the stage, every member of the band were energetic and a (no pun intended) joy to watch. In a three piece band, there can be no weak link. Everyone in TJF showed up and filled the stage with sound, personality, and power. Spacey shoe-gaze rock filled the walls of the Fine Line as the band ripped through their set. I was most impressed with the heaviness of the bass contrasting with Bryan’s sweet vocal pitch. The pairing worked pleasurably well. The synth and backing track allowed for the band to sound almost exactly like they do on the recorded version of their songs, all while still being on their toes and preforming live.

The heaviness was best showcased during the bands (arguably) best known song, “Whirring.” Thick, deep bass and clamoring double kick pedal created a mesmerizing ruckus on the stage. The audience seemed transfixed during this song, as the lights flickered and flashed with every rapid beat. Drummer Matt Thomas ended the song by standing up and banging a giant gong positioned right behind his kit.

Saturday night in the city filled me with warmth and good vibes. The Joy Formidable are one of those bands that can take an average evening and transform it into everything one may need to feel and experience — especially on a bone chillingly cold winter’s night. Ambience, groove, sensation, and the strength of feeling. The Joy Formidable bring it all with no frills and everything left on the stage. 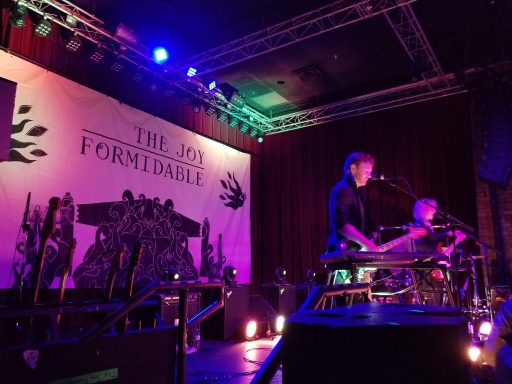 End of the Road? Maybe, Maybe Not. Who Cares? KISS Was In Town On Monday!

Let’s not sugarcoat it. I was never a huge KISS fan. Don’t take that to mean I don’t appreciate what they have done or the influence they have on the bands that I listen to […]

Catching Up With Whitey Morgan

Interview by Colton Davis   He won’t describe himself as an outlaw, but he ain’t no saint, either. Whitey Morgan and the 78’s have steadily gained national attention with their loud and aggressive take on […]