Every show I’ve been to in the past week has either been sold out or just a hair away from selling out. What this tells me is that I live the best city in the country where people actually care about live music and are willing to sacrifice a Netflix binge for a night out at a concert. Although sold out shows can get a bit annoying what with the lack of personal space and the fear of loosing a good spot with just a quick bathroom run, it makes my heart so warm to see show like last night’s The Get Up Kids sell out.

Kicking the night off was Remember Sports. Although I had never heard of Remember Sports prior to walking into The Turf Club last night, as soon as I saw the four members I new exactly who they were. I saw a band named Sports open up for Diet Cig last June. I loved them, like fell head over heels for their quirkiness and fun sound, but then they just kind of disappeared and I didn’t hear anything else about them. Well guys, I found them. With a location change from Pennsylvania to Ohio and a name change to match, that Sports band I fell in love with last year is still out there and still doing it just under a different name.

It may have been over a year since I saw them last but their music was instantly recognizable. It’s quirky and fun while having this sense of emotion behind it that is hard to put into words. Maybe it’s the way vocalist Carmen Perry’s vocals aren’t traditionally perfect but are perfect in every other way. Although clearly singing with a beautiful voice, her lyrics and voice are almost more like a conversation than a song. Maybe that’s because of the real life lyrics that, although simple, make something stir up inside of you or maybe it’s just the very calming and real sound of her voice. Regardless, Remember Sports’ sound is one of those sounds that won’t just leave your mind when you leave their live show.

Their set was quick but, as a clearly unknown band to majority of the audience as made obvious from the conversations going on around me, they clearly packed a punch and made a lasting impression on the sold out crowd. That’s honestly pretty impressive considering they were opening up for the legendary Get Up Kids. I would have expected for the older audience to just talk through the opening set on Friday night while catching up with old friends but Remember Sports was the perfect opening act to help keep that from happening. If you were in the venue while they were playing, you had your ears to the speakers and your eyes on the stage. I know I should have down a better job following Sports and I could have figured out that it was just a name and location change with a quick internet search but, regardless, I’m so happy to see they are still out there and doing it! 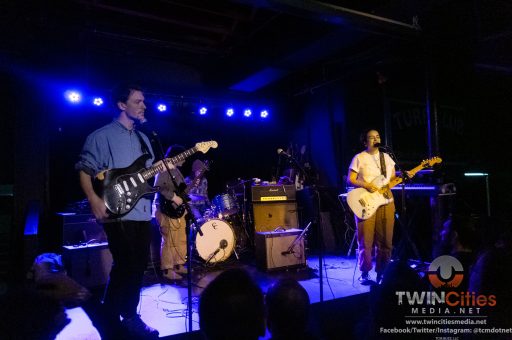 The stage switch was quick which was a blessing. The amount of excitement in the room as The Get Up Kids took the stage was immense and for good reason. The Get Up Kids are one of those bands that a whole generation grew up with. Since 1995, they have stuck true to their unique brand of pop-punk mixed with indie mixed with punk mixed with a little bit of everything in-between. Call them emo, call them pop-punk, call them  whatever you want but the bottom line is that these guys are one of the most influential bands in the scene that I’ve been calling home for years and to see them live was more than a treat.

With five albums out (I know that seems like very little considering they have been around for so long but each album was beyond perfect), there were far too many songs for this band to play everything that the audience wanted. In-between each song there was the inevitable “Play [insert song name here]” shouted as loudly as possible. Although the band was unable to honor every request shouted out throughout the lengthy hour and half long set, they did a perfect job of picking around twenty songs that hit every album and every mood they have ever created.

Everything about their on Friday was dead on. Matt Pryor’s vocals, along with the rest of the band, were dead on making the music coming out of the speakers sound exactly like a recording being played at top volume. The crowd was into and even got a small pit going about mid-way through the set that caught Matt’s eye. Although not a hard band by any means, their music has a sense of energy that help makes a little pit make sense. The emotions that the music has in it and the emotions that it makes you feel can be a bit much to handle so, sure, there were some overly excited fans that just could’t help but move around a bit. The atmosphere was magical. Between the people moving and absolutely everyone singing along to every word, you could feel this sense of pure appreciation that flowed from the audience to band and vice versa. It was hard not to believe Jim Suptic when he called Friday night’s crowd the best one thus far on the tour but, I mean, no surprise, it’s The Twin Cities and we know good music up here.

Like a couple of other shows this week, I was left wanting to much more but, as I shuffled outside into the snowy streets and freezing cold air that is winter up here, I couldn’t help but feel warm. I had just experienced one of the most influential bands in the scene in an intimate venue that I’m lucky enough to call a home away from home surrounded by strangers who all share the same love and passion for music that I do. Yeah, it was a good night.

A Conversation with September Mourning

We recently had the opportunity to catch up with Emily Lazar aka September of September Mourning. She called us from the road during a rare day off in St. Louis to talk about the tour, […]

Before there was Public Enemy or Rage Against The Machine, there was MC5.  While other bands were singing about going to San Francisco with flowers in your hair and smiling on your brother, MC5 was […]