It’s time to set a new level! The past few years of heavy rock music have been geared very much toward formula. Typically, metalcore bands will follow the song structure of verse-chorus-verse-chorus, each time alternating between heavy and melodic. It worked for a little while, but now it’s just become mind-numbingly routine. The Funeral Portrait take a dagger to that type of songwriting and sacrifice it at the altar of their new record A Moment Of Silence. Operatic melodies cross directly over passionate screams and guitar solos (“Double Helix”) as they experiment with rhythmic patterns and dead silence (the title track, “Save Yourself”). A Moment Of Silence is incredibly versatile and knocks down many of metalcore’s conventions and boundaries.

The Funeral Portrait, who has hit the road with Islander and Bad Seed Rising will be in making a stop in Burnsville at The Garage on Saturday, June 10th. Ticket are available through The Garage box office online. 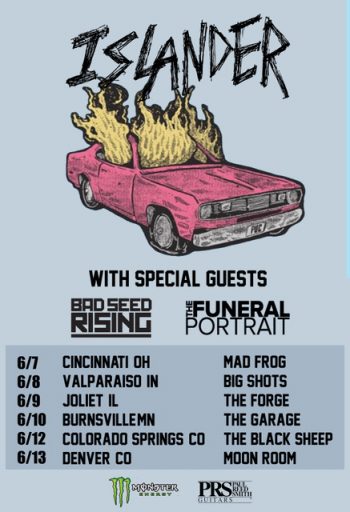 The Funeral Portrait released their latest album, A Moment of Silence, via Revival Records in 2016 and have since been touring, performing at Launch Music Festival as well as a few tours alongside acts including Famous Last Words, Convictions, and Oh, Sleeper. Check out the band’s latest music video for “Like Father, Like Son” here:

Growing up, I inherited my musical taste from my dad’s vinyl collection.  I was infatuated with looking through his prized collection and one of the first I remember listening to obsessively was Eric Clapton’s Slowhand.  His […]

Indie Rock Band “The Kills” consists of American singer Alison Mosshart and British guitarist Jamie Hince. It has been a few years since their last album (2011) and their fans are eager for the new […]

John K. Samson At The Turf. Always Darkest Before The Dawn.

I love those shows when a bunch of friends and family pile in the car.  Even more when you run into unrelated branches of your social tree at the venue.  Some bands or artists have […]