If you were looking for fast, dirty, messy punk, accompanied by sweaty moshing and unhinged chaos, hopefully you made it out to see The Dirty Nil absolutely tear the 7th St Entry to the ground during their headlining show last night. The band left everything they had on the stage, playing with a powerful, high energy throughout the entire set.

Before The Dirty Nil took the stage, the night started out with Vancouver rock band Dead Soft and local Minneapolis sweethearts Johnny Yuma. I was not really familiar with either of these bands before the show, but both of them impressed me with their tight, dynamic sets.

Johnny Yuma instantly captivated the audience, as lead singer Elliot Heerman came out without a backing band or an instrument and sang an A capella cover of “John the Revelator” into a yellow telephone prop that was sitting on stage as part of a living room setting. Soon after, the rest of the band came out wearing purple and black dresses and played a unique blend of heavy, velvety music. Overall, I was impressed by their performance. Dead Soft also played a great set, as they came out and delivered a gritty and aggressive type of rock that the audience seemed to really enjoy. 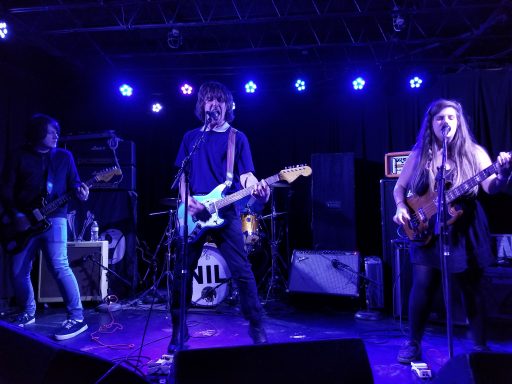 As Dead Soft wrapped up, it was time for the main attraction; the band we all were waiting for — The Dirty Nil. The Dirty Nil are a band I just recently got into, but I had the chance to chat with lead singer Luke Bentham a week or so before their show. That interview can be found here. Having the chance to get to know Luke and a little bit of backstory about the band was enough to get me hyped for this show. Plus, I’ve been spinning their new album, Master Volume pretty heavily ever since it came out.

As the lights dimmed, the ‘Nil came onto the stage with Darude’s “Sandstorm” blaring over the loudspeakers. This instantly sparked a dancing audience screaming in a roaring applause. Looking at the crowd’s reaction, the band were all smiles, and wasted absolutely no time getting the crowd fired up, as they consecutively played the first three songs off Master Volume. Each song they played was fast, heavy, and incredibly loud.

Frontman Luke Bentham wailed on his guitar and fervently screamed into the mic like he had nothing to lose. His stage antics included jumping all over the stage, headbanging, and dropping into ankle breaking positions as he calmly chewed a piece of Hubba-Bubba bubblegum like it was nothing. Bassist Ross Miller was also full of a contagious energy, as he bounced around the stage, fist bumping fans in the crowd while he slapped the bass and screamed backup vocals. Drummer Kyle Fisher seemed to be the fan-favorite of the night, as the crowd would break out into loud chants of “Kyle, Kyle, Kyle!” at random points to which he could only smile and laugh at.

The Dirty Nil’s set was filled with non-stop dancing, and heavy crowd participation as Bentham would grab the microphone stand and place it in the center of the crowd for people to scream the lyrics into. This happened multiple times throughout the night, with the audience continuously taking on the challenge of being louder and louder each time they grabbed the mic. Towards the end of the set, the band gave a nod to the Minneapolis punk scene and the historic 7th St Entry by playing their heavy hit, “Wrestle Yü to Hüsker Dü”. The band did a tremendous job honoring their punk rock heroes, as they played hard, heavy and headbanged throughout the rest of the set.

The main set wrapped up with “Evil Side”, which absolutely went full throttle and was also incredibly heavy. Before The Dirty Nil could walk off the stage, the fans were ruthlessly craving more and weren’t hesitant to let the band know it. With 250 people screaming for an encore, the band came back out and started their encore with a cover of Metallica’s 1983 shredder “Hit the Lights.”  Being a die-hard Metallica fan, I felt an immediate rush of joy and energy fill me when the first notes of the song hit. I headbanged and moshed as if it were the last time I would ever hear the song again. This was easily one of my favorite encore songs I have ever seen, as they absolutely killed it and payed perfect homage to the biggest and best heavy metal band in the world. The ‘Nil were melting faces. 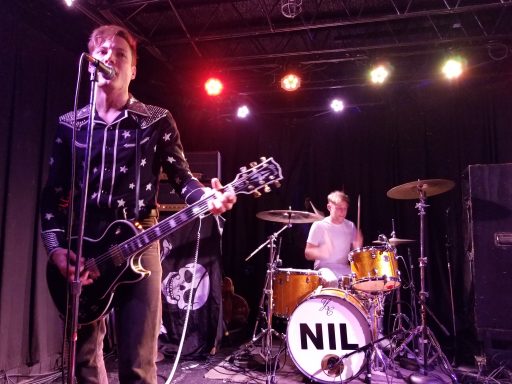 As the song ended and the lights came up, the crowd began to disperse in a collectively sweaty fashion. Basically, my motto is this — the sweatier you are, the better the show. This was absolutely the case for The Dirty Nil, as the crowd gave the band everything they had during their set and the band returned the favor. There was not a single person in the pit standing still as people were jumping, headbanging, and moshing throughout the entire night while passionately screaming the lyrics back to the band. It’s been awhile since I have been at a show with full crowd participation, but fans for The Dirty Nil were extremely enthusiastic and engaging.

Ultimately, if you are not an avid Dirty Nil fan after last night’s show, you need to step aside and make room for the dozens of new diehards. It is very likely this band will continue to gain a significant amount of traction in the next few months as they tour in support of their new album, Master Volume. This show was just what I needed, and left me feeling insanely hyped and wanting more. I was really itching to get back in my element — a good punk rock show. Sure enough, The Dirty Nil delivered just that.

So here’s to punk rock still being alive and well. Long live the Nil. 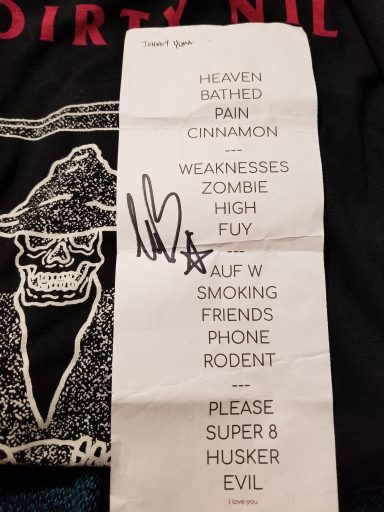 Florida raised musician Tyler Musto, better known as blackbear, is one of the most talented personalities in R&B. Throughout his 13-year music career, he has released six EP’s, five studio albums, and two collaborative albums. […]