The Portland-based band The Dandy Warhols, entered the stage on a cold Saturday evening welcomed by the fans’ screams and cheers. The near capacity crowd at Fine Line Music Cafe was prepped, fully hydrated, and ready for a great time. The band hit the stage and took the audience through many of their successes from back in 1994 up to their last album. 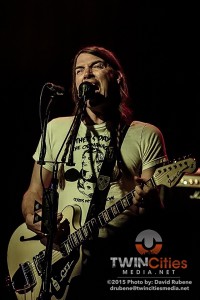 Their alternative rock sound is characterized by some great sing along anthems like “Get Off”. The guitar riffs space out and are distorted at times giving that touch of psychedelic which characterises their music. Courtney Taylor-Taylor deep voice is the cherry on top of the cake, you don’t want him to stop singing, ever. His vocalizes in some of the songs have the same attractive effect.

In “Last High” he also unveils his falsetto, backed up by the audience singing along. A laid back song which carries you away with its magic flow of notes. The bells and keyboards played by Zia McCabe render their tunes somehow softer with a sort of gypsy sound. The unmistakable riffs of “We Used To Be Friends” filled the venue as the audience swayed away by the sounds. The colorful stage lights flash white in “Bohemian Like You”, which added an impactful effect to their anthem. The crowd loved it!

Check out The Dandy Warhols online at:

Annie Fitzgerald performed a beautiful and heartfelt acoustic set at The Icehouse on Sunday as part of Vicky Emerson’s CD Release Performance.

Homewrecker Heats Up The Terminal Bar in Minneapolis

Homewrecker Heats Up The Terminal Bar in Minneapolis […]

Photos by David Rubene Last night was one of those nights where I got to see a living legend in a super intimate venue. Doyle was part of the legendary band The Misfits and, although […]