Come see The Blue Stones play Black Holes (Solid Ground) at the Fine Line on Saturday March 23rd.  Tickets are just $10 (or $20 reserved balcony) for the 93X Low Dough Show.  The show is 18+ with doors at 7pm and opening band Lavender Daughter starting at 8pm.  Get your tickets HERE before they are gone.

Listening to the larger-than-life, but tight and precise blues-rock of The Blue Stones on their Entertainment One Music debut, Black Holes, it is astonishing to discover all that sound and fury is created by just two people.

Guitarist/vocalist/lyricist Tarek Jafar and percussionist/backing vocalist Justin Tessier, have known each other since meeting as kids just across the Detroit River in their Canadian hometown of Windsor, Ontario. But it wasn’t until attending university together, that they decided to combine their talents into a musical project.

The Blue Stones have an incredibly diverse palette of influences — and although they’re a duo, it’s unfair to limit the comparisons just to The Black Keys and The White Stripes. The weight of Led Zeppelin, the grit of Hendrix and groove from hip-hop artists like J. Cole and Kanye are all there. But in an effort that’s unlike any other in contemporary rock, the result is something entirely unique to today’s musical landscape.

From the slap back echo and the Rolling Stones’ “ooh-oohs” in the gut-punching “The Drop,” through the tribute to perseverance in the catchy, bluesy “Rolling with the Punches” and the acoustic-to-electric whisper-to-a-scream dynamism of the title track, Black Holes shows a band blasting into outer space and leaving “Solid Ground” behind. It’s the voyage of a group beginning to find its way, emerging from isolation and perspiration to inspiration, reaching an audience waiting to be tapped and entertained. An Alternative Blues Rock band fighting the good fight, looking to connect in an increasingly fragmented music universe.

“The album’s about being a young adult and entering the real world from a sheltered environment, like college,” explains Jafar. “Feeling torn between taking the secure path or doing something that might be riskier, but you’re passionate about… following what you love as opposed to sticking to the straight and narrow.”

Indeed, “Black Holes (Solid Ground)” is about precisely that either/or dichotomy, caught between infinite space and terra firma, willing to take a shot at the unknown rather than settle for the familiar, in between Jafar’s restless guitars and Tessier’s heavy-hitting and massively impressive drum beats.

“We play blues-rock, though it’s not loose and dirty,” explains Justin. “It’s lean, raw, tight, without a wasted note.”

It took seven long years – and two independently released EPs – for The Blue Stones to hone their approach, putting in those requisite 10,000 hours to perfect their craft, and then build upon that. As Jafar describes the audience participation of “Rolling with the Punches,” which is the group’s usual, rollicking set-closer, “It takes a lot to be a success. You have to stay determined and focused. And it’s always fun to have people sing the words you’ve written and just sit back and take it all in.”

There’s a similar message in the album finale, “Magic,” in which Jafar admits he doesn’t believe in it. “People these days are all looking for instant gratification, the quick reward,” he says. “If you want something that will endure, that’s not how it works. You have to put in the hours and the effort.”

The Blue Stones have done just that, with an approach that isn’t afraid to take chances, like mining Jafar’s love of hip-hop and Miles Davis into the funky backbeat of “Be My Fire” or the epic psychedelic experimentation in the pitch-dark “Midnight.”

“You never know where we’ll pull inspiration from,” says Justin.

“This is the album we’ve always wanted to make,” adds Tarek. “We set out to show we’re more than loud and lo-fi, that we have range and dynamics.”
And now it’s time to take to the road, play these songs and add to their growing legion of admirers.

“We have dreams and we have goals, but we separate the two,” adds Justin. “A dream is to headline Joe Louis Arena in Detroit, where we saw so many great bands. Our goal, though, is to reach out at every show and win people over one by one. That’s how we’ve always done it and it’s worked so far. We believe in what we’re doing and we have emotional connections to the songs we’re playing. We want to provide our audience with the kind of experiences we had when we were younger attending shows of our favorites. That’s what we look to pass on.”

“My whole attitude is, let’s see what happens,” nods Tarek. “And that’s allowed me to be up for anything.” “It’s not over now,” he sings in “Lay,” “Don’t lay your flag and turn away/Please don’t leave me with another regret.”

With the release of Black Holes, The Blue Stones are ready to raise the stakes and turn up the heat. 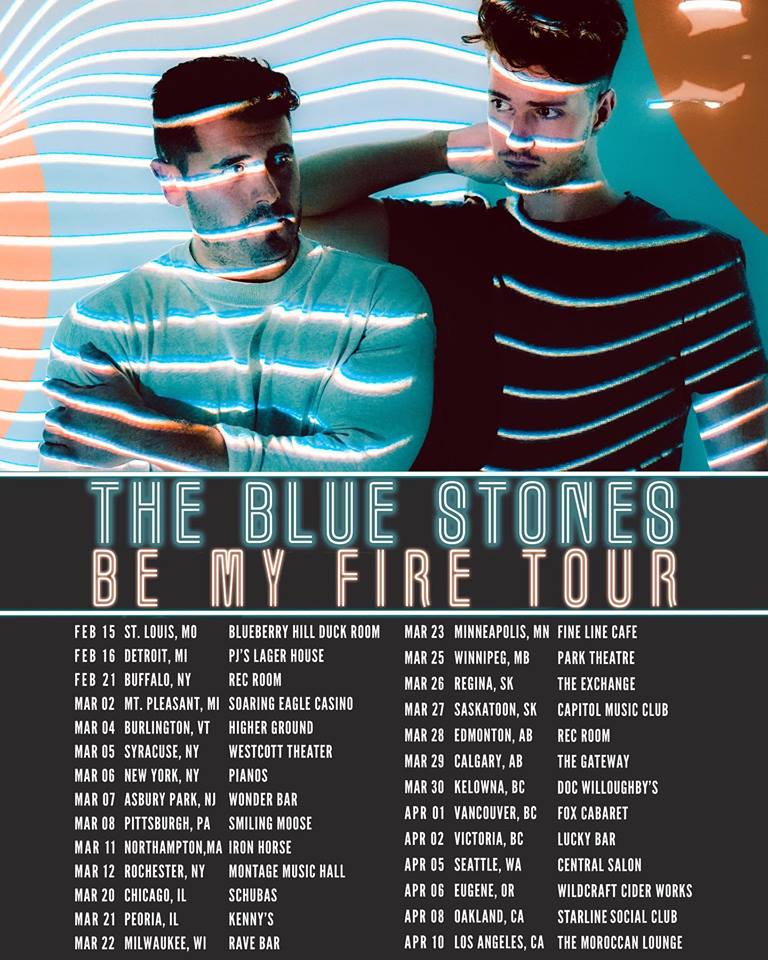 Lavender Daughter is a 4-piece indie surf grunge band based out of the Twin Cities. They enjoy long walks on the beach, pina coladas, and a nice shaky tremolo. The group recorded their first self titled full-length LP in September 2017. You can catch them actively playing shows throughout the Midwest in an effort to share their sweet sound.

X Ambassadors Blow The Roof Off Of Music Hall MPLS

I tried to go see X Ambassadors when they played a free show downtown during Super Bowl Week. Unfortunately, it was snowing, I was drunk, there were too many people and, well, it just didn’t […]

Coming from Portland, OR Hipster band……….What? Wait! Garage Rock? Punk? Now this you should see! Summer Cannibals is a 4 piece band with . They released their album “Show Us Your Mind” a few months […]

Summer is a wonderful time in Minneapolis. People are friendly and the amount of outdoor events is staggering. Last night was one of those nights and with our inevitable eight month long winter looming in […]