TCM’s fourth day at SXSW, my second. The sunshine retreated for a day, and the cooler weather crept in. While I thought it would be hard to beat my first day at SXSW (which featured absolutely killer sets from Reignwolf, Ben Kweller, and Car Seat Headrest), my second day involved seeing some of my current favorite artists in some pretty rad venues.

After spending the majority of the morning walking around the SXSW Convention Center, I hopped in a Lyft and made my way down to the historic Arlyn Studios to catch one of my current favorite bands, The Dirty Nil. I was embarking on this mission to see the Nil solo, but I was up for the adventure. Just outside of Austin, Arlyn Studios stands adjacent to the Hotel Saint Cecilia, where the Foo Fighters recorded their Saint Cecilia EP and birthed the Sonic Highways album concept. The studio boasts an impressive repertoire of bands that have come through and recorded music within its walls. As I arrived and saw the crowd of people eager to get in the door, I knew this was going to be a SXSW treat. The second you walk into Arlyn, you see all of the prestigious records that have been recorded there hanging proudly on the wall. It’s a great spot to celebrate live music.

When I made my way into the studio, I found the stage nestled in a quiet, dark room and saw some older aged people sitting quietly on stools in the midst of the crowd as another artist was wrapping up. Scanning the room, I thought to myself, “God, I don’t think anybody here knows what they’re getting into. They’re at a singer-songwriter showcase about to have their faces melted off by a punk rock band from Ontario.” Surely enough, the Nil came out and absolutely shredded. Playing to unfamiliar faces was not a problem for these guys, and they rose to the occasion of grabbing people’s attention right off the bat. 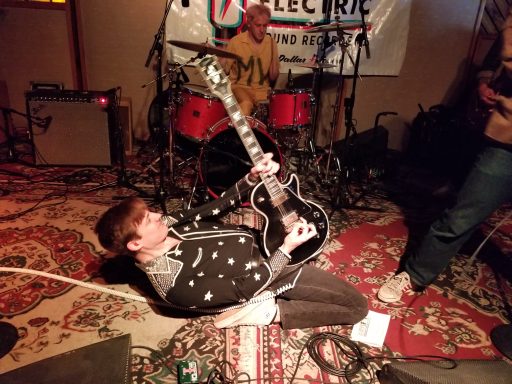 Lead singer Luke Bentham wailed on his guitar, jumping around and screaming into the mic, preforming his signature knee bend while chewing on some bubble gum. The energy was there, just like when I saw them at the 7th St. Entry last October. Unfortunately, bassist Ross Miller broke his hand awhile ago after he fell on some ice, so while a fill in bassist was preforming for him, he stood in as the hype man, jumping around and screaming getting the crowd fired up. It was so good to see the Nil again. They absolutely crush it and are (in my opinion) one of the best live bands going in the scene right now.

After enjoying the Nil, I made my way over to the Thicket Food Truck park to catch The Shackletons. Having not eaten anything all day except a banana and some chicken (the ultimate combo) I grabbed some pad thai from one of the food trucks and settled in on a park bench. Although the venue location was quite aways out of town, it was still worth the trek. The Shackletons played with precision and high energy, carrying on the fast, punk rock vibe I was trying to maintain in my day. 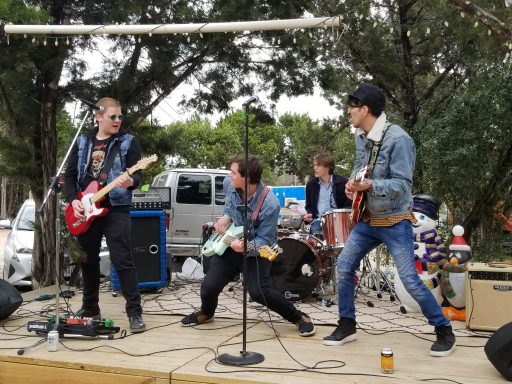 The last artist I saw of the night was a person very near and dear to my heart — the iconic Laura Jane Grace. LJG is best known as the founder, lead singer, songwriter and guitarist of the punk rock band Against Me!. She was playing an acoustic set at the Central Presbyterian Church near 6th Street, her final performance at SXSW. I was completely intrigued about seeing her preform at a church, and I wasn’t alone. She drew a hefty crowd inside where peopled flowed in and packed the pews.

Laura Jane Grace’s name provides a lot of indication about the way she carries herself on the stage. She is fierce, strong, and she is absolute grace. Her voice was absolutely beautiful, echoing off the walls of the chapel. My favorite moment of the night was when she covered The Replacements, “Androgynous.” Watching her perform that song almost brought tears to my eyes. I loved seeing the true trans soul rebel creating such a wonderful moment on stage. She ended her set by playing a cover of the Mountain Goat’s “The Best Ever Death Metal Band in Denton.” The last verse of this song included the screaming of the lyrics “HAIL SATAN” as loud as she could in the center of the church. I couldn’t think of a more appropriate and punk rock way to end the show. 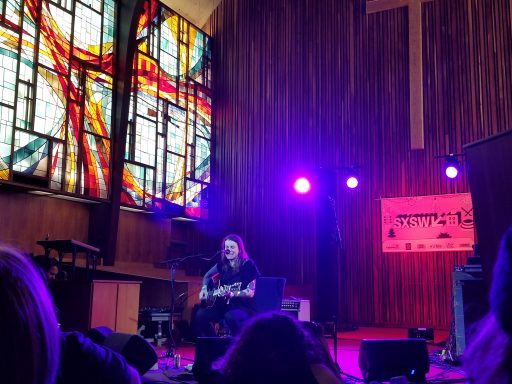 Even after several years of running our blog, I keep running into new music communities in the Twin Cities and find myself surprised at their energy and dedication. I always liked latin music from Shakira […]

Babymetal and Avatar Make The Perfect Pair At Myth Show

I was intrigued by the headliner of last night’s show. I had never heard their music but their reputation and band name speaks volumes. Babymetal– I mean, if that band name doesn’t intrigue you at […]