Heavy rain, the dragon tail of a system being called a Weather Bomb, swept through before dawn.  By 9am the first of the festival denizens began to stir and the sky turned blue.  Mid 70’s with a nice breeze.  Hard to fathom a crippling blizzard blasting the southern plains between the Twin Cities and Austin, TX.

At least one MN band, The Shackletons, got to drive through it.  They reported in to say they ran in front of the snow.  But had to hang on for dear life as the Kansas winds tried to sweep them from I-35.  Anything in the name of rock and roll!

There were some great business seminars in the morning.  Unfortunately, unless you’re an industry insider, most are off limits.  Three tiers of access: Big Shot (don’t mean that in a bitter way), Artist and Festival goer.  So while my Artist travel companion was able to sit in a New Music Programming session which featured The Current’s Jim McGuinn and a couple of his national counterparts eliciting new band reactions (it was this session a couple years ago that broke Hippo Campus nationally), I was turned away.  Neither of us was able to attend keynote addresses by T-Bone Burnett or David Byrne.

But there’s no time to be bitter because day parties are rocking all over the area.  In an effort to save the feet a bit we opted to hang out during the day at The Canadian Barbecue Bash.  The showcase was fantastic and covered the waterfront in terms of musical styles.

All of the sets were short and all of them outstanding.  Really enjoyed The Tallies with their jangly pop sensibilities.  If you’re a fan of Bad Bad Hats, it’s a band you should know.

I was pleasantly surprised by Melanie Broulee, a Toronto based singer/songwriter based out of Toronto.  But she hails from a little town in the corner of Ontario, French speaking Quebec and Upstate New York.  She would have easily fit right into Nashville.  With an acoustic guitar and a single electric beside her, she delivered a set of road weary, heartfelt original music.  But whenever, things began to slide toward maudlin, she kicked it up a notch.  After all, it was a sunny day in TX.

I kept catching echoes of Bobby Gentry (remember Billy Joe McCallister jumping off the Tallahatchie bridge?).  She closed it with a French rendition of Nancy Sinatra’s These Boots Were Made For Walkin’.  The audience ate it up.

Right behind her came the Ontario powerhouse The Dirty Nil.  It will take a day for my ears to recover.  TCM covered this band in depth last year when they tore up The Entry.  There’s nothing like a Les Paul plugged into a Marshall stack to knock the walls down.  There’s a reason this young band is breaking big.  Some road dates with The Who indicate the power I’m talking about.  Somewhere in a small town in Ontario there are a bunch of high school teachers who remember these guys from a decade earlier.  If I were to guess, I suspect they had their hands full.  Irritated and exasperated at times.  But secretly they must have liked them.  Those boys are all about going to 11 and having fun. 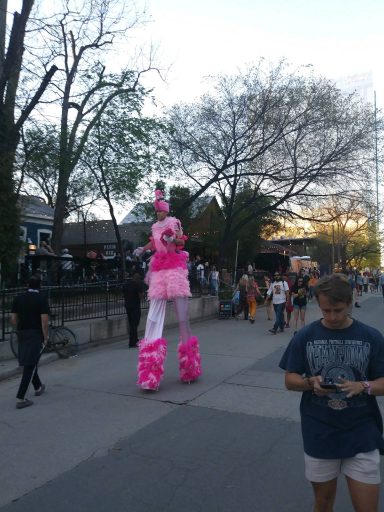 My companion immediately scooted off to catch a bit of Bad Books, playing poolside.  This is the new project of Kevin Devine and members from Manchester Orchestra.  Again, a premium show so regular festival goers weren’t invited.  But an hour to chill and get off my tired legs was welcome.

Following a bit of food truck dinner, we debated whether we should just go shopping for bands, return to Latitude for another dose of UK rock or stay in the neighborhood and make it an all Canada day.  That’s what we did.  Drakulas in all black did their high energy, non stop Misfits type set before The Dirty Nil returned for a full set.  As I walked down the street, I decided either the neighbors were really tolerant or they must just leave town for a week.

Final impressions of the day?  Well, the boys and girls from Canada know how to throw a party.  But more than anything else, I am struck by the sheer diversity of SXSW.  I have NEVER been in a place with so many people of different color, nationality, language, age or orientation.  Punks from South America talking with suits from Indonesia.  You name it, they’re here.  United by the power of music.

I’ll carry with me a mental picture of four young Japanese shyly eyeing a burger food truck before going up and ordering.  Out came 4 huge burgers with all the fixings, fries and a Coke.  They unwrapped everything at a picnic table .  It was like kids at Christmas, with oohs and aahs.  Then out came the cameras for formal portraits with this strange delicacy.  Big smiles all around as the juice ran down their chins.  Only in America.

Spring has finally sprung up here in the Twin Cities so obviously, on the first nice day of the year, I spent my day sleeping off a hangover and hating myself. Hey, I had the […]

Lately, I’ve been on a bit of a blues bender.  Gary Clark, Jr, Dave Alvin, Scott Holt, The Record Company.  If you’ve been out of that loop, get with the program!  Tuesday night brought Austin […]

What a difference a day makes…….First Avenue had recovered from Wednesday’s debauchery, and a different but no less excited crowd filled the venue. Boston band Lake Street Dive’s tour promoting their newly released album “Side […]