The four piece band composed of Jessica Boudreaux, Marc Swart, Jenny Logan and Devon Shirley stopped at First Avenue’s 7th Street Entry Wednesday night in support of their new album “Show Us Your Mind “. Look for reviews of supporting bands CatBath and Hollow Boys on TCM soon. They certainly came ready to play, the band was on stage and ready 5 minutes before their scheduled time. Swart passed the time by playing along to the background music. 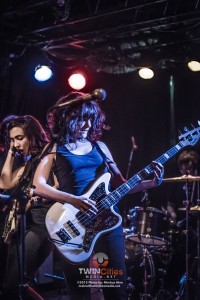 Once unleashed Summer Cannibals tore straight into “All it takes” with an energy that had some in the audience sending worried looks towards the ceiling. Boudreaux and Logan are quite energetic and took up every inch of the small stage. Between songs the band chatted with the audience about their encounter with our state bird, how cold the ocean on the Oregon coast is, and how the opening bands should move to Portland. When being told that they should move to MN instead, they used the “It’s to cold” defense.

Summer Cannibals set progressed quickly and overall it was a great show by a very cool band.

Set List:
All it takes
Something New
WTF
Full of it
The Lover
Just a little bit
Bitch
Not Enough
Not your Turn
Go Home
Make Up

Self-Evident To Release New Album At Icehouse on 1/18

Local eclectic rock trio, Self-Evident, will be releasing their much anticipated follow up to their 2015 album on January 18, 2019. “Self-Evident can’t be easily categorized. Sure, the Minneapolis trio’s music includes aspects of punk, […]

The sixth promotional video for the upcoming Country Rock For A Cause Benefit Festival promo videos. Please help us spread the word about the festival, the amazing line-up of artists, and the great benefit it […]