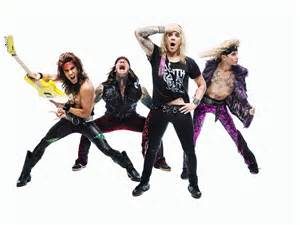 Rock/Glam metal band Steel Panther returns to the Myth St. Paul 12/8. Los Angeles based band  Steel Panther  mostly known for their profane and humorous lyrics as well as their exaggerated on-stage personae that was stereotypical 1980s.

Steel Panther is known for having the Longest Running Hollywood Weekly Monday night show on the Sunset Strip in history. Started February 1999 to 2014. Starting at the Johnny Depp’s Viper Room, The Roxy Theater, The Key Club and ending at the House of Blues. Touring demands forced Steel Panther to give up the weekly residencies in Los Angeles and Las Vegas. Steel Panther released their live acoustic album “ Live from Lexxi’s Mom’s Garage” in 2016. In early 2017 the fourth studio album “ Lower the Bar “ will be released. Some general admission tickets still remain. This certainly isn’t a show to miss.

Sometimes the universe conspires against you and you must arrive 1 hour and 20 minutes late for a show. You will wonder if it will really be worth a 40 minute drive just to catch […]

The Triumphant Return Of EELS To First Avenue

I cannot take credit for the title of this article. It comes from the own words of the night’s headliner, EELS. Their chosen words fit perfectly with the atmosphere of the nights show. EELS was […]

Miranda Sings Strikes The Right Tones At The Orpheum

Pretty much anyone that has ever been on YouTube has come across a video by Miranda Sings. In my case, my first experience ended after a few seconds of terrible sounds coming from my computer […]