The Brooklyn-based duo known as Sleigh Bells emerged in the Fall of 2009 with rhythmic pop songs that combine overdriven guitar riffs and sugary female vocal melodies. Guitarist/producer Derek Miller teamed up with singer Alexis Krauss after he happened to serve her and her mother at a Brazilian restaurant in Brooklyn.

This summer has been quite eventful for them with the release of a new track “Hyper Dark”, a new album “Jessica Rabbit” out in the fall and a copyright lawsuit they filed against Demi Lavato a a short US tour that will bring them to the Fine Line on 9/3. Tickets are still available HERE. 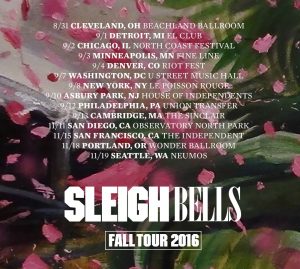