Born under the big skies of Bozeman, Montana, post-punk triad Sioux Falls is Isaac Eiger (vocals/guitar), Fred Nixon (bass), and Ben Scott (drums). Eiger and Nixon started playing together at sixteen, and in 2010 released their first EP The Ace House Tapes. After graduating from high school the pair moved west to Portland and cycled through a whopping six drummers before serendipitously finding Scott on Craigslist.

Their new release Rot Forever is not only their first full-length, but an expansive seventy-three minute double album. It’s marked by their characteristically vast soundscape that seems at least in part inspired by their Montana roots. The state’s mammoth scenery dwarfs the humanity that lives in its shadow, and seems to relate to Eiger’s preoccupation with his own mortality on Rot Forever. In “The Winner” he sings, “I just wanna believe that what I’m doing means something to someone else before I die and rot forever.” 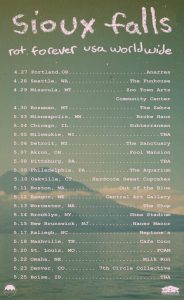