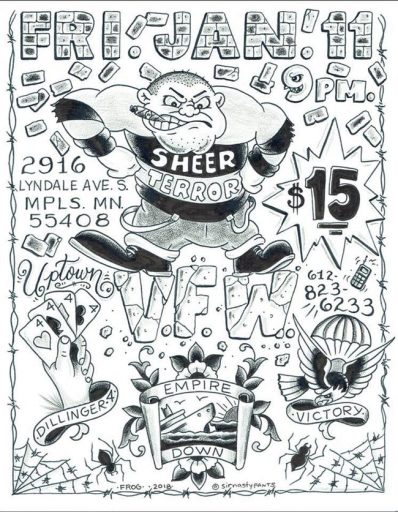 The one and only Sheer Terror will be playing at The Uptown VFW on Friday, January 11th for a can’t miss show. Sheer Terror are an American hardcore punk band from New York City. The band was one of the first to combine elements of heavy metal with a hardcore punk base, pioneering a heavier style of hardcore that would create many bands in the following decades. Formed in late 1984, the band stayed together until 1998, through numerous lineup changes and shifts in musical style. In October 2004, the band reunited and gave two shows at New York City’s CBGB Club. Since then, the band has been playing off and on with even more line-up changes. The current line up of Sheer Terror is: Paul Bearer, Johnny Eggz (guitar), Gary Bennett (Guitar), Jason Çarter (bass), and Anthony Corallo (drums). Them playing at as spot as intimate as the Uptown VFW is definitely a treat.

Joining Sheer Terror will be local superstars- Dillinger Four. Having just seen these guys at Wrestlepalooza, I am definitely ready for a full set from the where the audience is sure to get rowdy and sweaty. Dillinger Four are from Minneapolis, Minnesota. They formed in 1994. In terms of importance, they are to the ‘90s and ’00s what Black Flag was to the ’80s (without the Grateful Dead worship). It’s not only what they are, a great band, it’s what they’ve helped inspire, build, and represent. They’re an earthquake. They’re the Redd Foxx- mixed with the Chalmers Johnson of punk rock.

Locals Victory, Empire Down, and Getting Stabbed will also be opening the show.

Seriously, don’t miss this one. Tickets are still available here.