Sevendust came into Minnesota for a all out sensory assault Wednesday evening at Mill City Nights. The Atlanta based heavy metal band stopped for their second show of a month long North American tour. Sevendust is currently out touring promoting their new album Kill the Flaw. The album was released in October 2015 under the Asylum label. Two supporting bands, Red Tide Rising and Crobot, warmed up the evening and got the crowd on their feet. 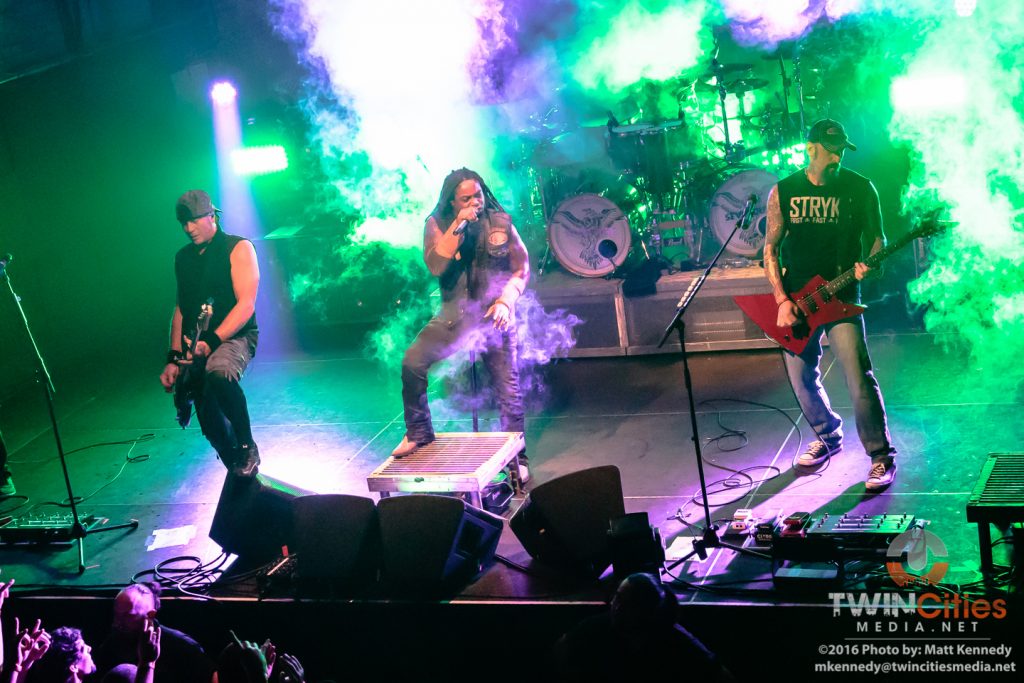 Colorado rockers Red Tide Rising having a great time touring the country with Sevendust and Crobot while promoting their new album Voices which released in this past May. The band came out playing to impress and the crowd loved what they heard. Red Tide Rising played a short half hour set of  drop -dead hard rock.

Coming out of the depths of Pottsvile, Pennsylvania, Crobot is well known as a groovy, dirty rock band, while they formed in 2011, Crobot’s new album Welcome to Fat City will be released in September of this year under the Windup Label. The band played a hour long awesome set with an eleven song setlist that consisted of fan favorites like Nowhere to Hide, Not for Sale, and Welcome to Fat City. Crobot blew away the fans with a highly energetic set. I was absolutely amazed how entertaining they were. I couldn’t believe seeing the lead singer Brandon Yeagley jump onto the shoulders of guitarist Chris Bishop while playing he was in mid-solo. The fans were fully mesmerized by their performance and it was to no surprise.

As the excitement and anticipation grew in the crowd, Sevendust hit the stage and kicked of their set with Thank You. Lajon Witherspoon’s heavy metal lyrics just simply kicked ass. Sevendust played a perfect selection of hits like Denial, Decay, Shine, and Pieces. Watching Sevendust live is truly an attack on your senses. Morgan Rose was thrilling to watch pound and beat the drums throughout the set. Lajon’s stage presence and vocals are out of this world. The fans loved watching bassist Vince Hornsby and guitarist John Connolly interact with the crowd. It was a really special moment in the evening when they played an acoustic version of Denial. The crowds response was unbelievable. Sevendust is always a must see band as you are guaranteed to see a performance of 120% on stage.

“Are You Local” with Nick Jordan, Gramma’s Boyfriend, and The Suburbs at First Avenue

The Star Tribune’s “Are You Local” contest crowned its winner Friday night at First Avenue: Nick Jordan. And to showcase the Minnesota Music scene they lined up artists that span 40 years of great local […]

The BoDeans And Phipps Fest Rock The Hudson Lake Front

On Saturday, August 14, the BoDeans and 3 other bands performed in the Lake Front Park Bandshell in Hudson, WI as part of Phipps Fest.  The weather was beautiful and there was a variety of […]

I love going to concerts but it’s nice to switch it up every one in awhile. Whether it’s an orchestral performance or a showing of a movie, I feel like I’m constantly looking for something […]