In a time when YouTube sensations come and go in weeks, Scott Bradlee’s Postmodern Jukebox has managed to stay relevant for several years. From an early start in 2011 and getting serious in 2013 the band has a rotating cast of musicians and singers and has been publishing a new song each week.
Postmodern Jukebox’s covers of hits and notorious songs in different styles span the range from Miley Cyrus in 50’s Doo Wop to Guns and Roses “Sweet Child of mine” in New Orleans style. Some of the videos have well over 10 Million views. My personal favorite is a cover of Jason Derulo’s “Talk Dirty” as a Jewish Klemzer band complete with accordion and a rap in Yiddish.
PMJ started some live performances and quickly moved to national and international tours. Much like their YouTube channel performers change based on location and availability leading to a constantly changing set list. 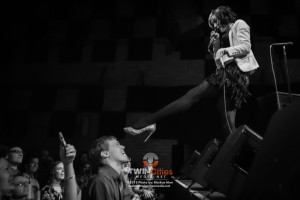 Mill City Nights was packed to the rafters Friday Night for PMJs for their first show ever in Minnesota. Many in the audience were dressed up in time period outfits, although the barefoot folks in coveralls could have just been here from Wisconsin wearing their Sunday best.
Postmodern Jukebox’s live show is impressive and nicely set up to connect the broad range of styles and songs. Bradlee and the band area a steady fixture but the focus is clearly on the vocalists. Scott was positioned to be visible but not lit in a way that eyes would be drawn to him. For us photographers it was a bit of a dog’s breakfast. The performers were close to the front of the stage but the 3 microphone stand setup combined with the narrowest pit I ever squeezed myself in (2ft deep if that) limited mobility and caused a mike stand to be in pretty much every picture. 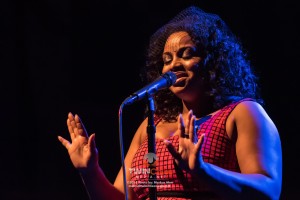 Robin Anderson opened the show with tap dancer Sarah Reich on a platform tapping along. It was a homecoming for Ariana Savalas who grew up in Minnesota. The show was held together by an MC and tongue in cheek advertisements of modern products such as “Look for Tinder in your newspapers Sunday edition for respectable gentlemen”. 2 hours of PMJ went by quickly and nobody in the audience went home disappointed.

Yellowcard has been a staple in the pop-punk world for over fifteen years but they have decided that their time is done. They will be making a stop at Mill City Nights on Halloween night […]

Band of Skulls makes us smile, Murder Shoes makes us sad at the Fine Line

Sunday night at the Fine Line turned out to be bittersweet. Sweet because because Band of Skulls absolutely brought it, bitter because we learned that opener Murder Shoes was breaking up and playing their last […]