A night full of peace, love and rock n’ roll — who wouldn’t want to take part in such a heartwarming experience? Well, last night I considered myself a lucky participant as I got to experience all three when legendary musician Ringo Starr and his All-Starr Band took the stage at the Ordway Music Theater.

Ringo has been playing with his appropriately named supergroup, “All-Starr Band” since 1989. The band features famous musicians and singers from well-known classic rock bands. However, members of the band have alternated over the years, with no band members lasting more than a couple tour legs at a time. This steady rotation has helped to keep the line-up fresh, as it gives Ringo’s audience something new to look forward to each time the band rolls back into town.

Ringo’s All-Starr Band for this tour boasted a stacked lineup of Colin Hay (Men at Work), Steve Lukather (Toto), Gregg Rolie (Santana and Journey), as well as Graham Gouldman (10cc). Every show on the tour features original songs from Ringo Starr, as well as each All-Starr band member’s popular songs – delivering a setlist full of hit after hit.

I had been looking forward to this show ever since its announcement last March, so when the day finally arrived – I couldn’t help but feel incredibly stoked. It was a late Sunday evening as I made my way to the venue and the streets of downtown St. Paul were feeling a bit sleepy. But that did not stop the drove of die-hard fans from lining up at the door waiting to get into the theater and find their seats. The anticipation of this show generated an unquestionable buzz throughout the cities, as it had been almost three years since the last time Ringo and his band came to town.

When I sat down in my seat, feelings of anticipation and excitement started to set in. I couldn’t believe I was seeing a member of The Beatles in the flesh. This definitely was going to be a night to remember, especially because I knew Sir Ringo was not the only attraction the night was going to offer.

I was especially excited to see Colin Hay from Men at Work. I had the opportunity to see Hay play a solo acoustic show last November at The Pantages Theater and was completely blown away by his guitar playing and storytelling abilities. So when I saw he was on the bill for Ringo’s All-Starr Band, I was immediately encouraged to see him perform again.

The band opened the set with a cover of Carl Perkins song “Matchbox” and then went straight into Ringo’s well known hit single “It Don’t Come Easy.” As this song began to play, I immediately felt a huge smile spread across my face watching Ringo dance along with his peace signs swaying in the air.

Ringo and the band then went into playing familiar covers from The Beatles, 10cc and Toto. “Rosanna” by Toto was an immediate showstopper, as everyone in the crowd stood on their feet and loudly sang along clapping their hands to the beat. 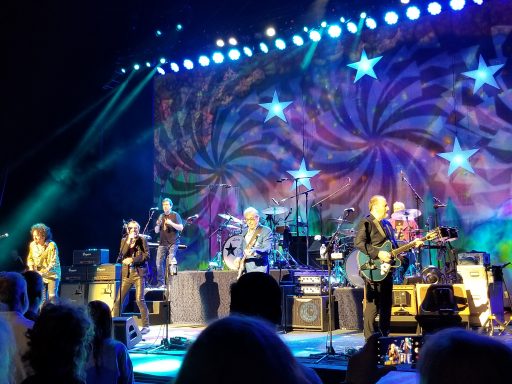 Not long after “Rosanna”, Ringo and the band played one of Colin Hay’s most beloved Men at Work songs, “Down Under.” I have never seen Hay backed by a full band or playing an electric guitar, but this song was vibrant and really got the crowd going as mostly everyone knew every word, especially the well known, cheeky lyric, “He just smiled and gave me a Vegemite sandwich!”

As the songs began to roll on, Ringo announced midway through the set that we were “at a special magical music moment in the show.” He briefly departed the stage and as he came back, the band started to play the first few, unmistakable notes of, “Yellow Submarine.” Encouraging everyone to sing along, Ringo joked, “If you don’t know this song, you’re in the wrong venue!”

As Ringo began to sing “Yellow Submarine”, I couldn’t help but get a huge smile on my face. The performance of this song was such a feel good moment, and there was a powerful wave of positive and nostalgic energy radiating through the crowd. Everyone was singing along and having a great time dancing along to a song near and dear to their hearts.

After “Yellow Submarine”, the band went on to play more covers from 10cc, including “I’m Not In Love”, Santana’s “Black Magic Woman”, as well as a few more original Ringo Starr songs. They also played additional Men at Work covers “Overkill” and “Who Can It Be Now.”

A little over halfway through the set, the band started to play infamous 80’s rock anthem “Africa” by Toto. Usually, I feel like this song is a cheesy anthem that has been overexploited by the radio and pop-culture throughout the years, but I have to admit it. When Lukather and the band went into “Africa”, I jumped out of my seat with a pulse of excitement. I felt myself embracing it immediately getting into the groove and (loudly, but poorly) singing along.

As the set neared its end, it seemed as though everyone in the crowd was feeling good, so the band decided to take it up another step before leaving the stage. Ringo ended the night by playing Beatles classic ballad, “With a Little Help From My Friends.” This song was so much fun, and had the entire crowd on their feet singing every word in harmony.

I departed the theater last night with a huge smile on my face, feeling incredibly lucky to have seen such a timeless song live. I definitely left the show fully embracing the vibes of peace, love and happiness.

The night before Thanksgiving we had a chance to stock up on our Rock’n Roll vibe before facing relatives with no cool at all. The Ike Reilly Assassination headed for First Avenue. Illinois’ Ike Reilly […]

The definition of “bliss” is complete happiness. Late Night Fights (LNF) might have attained that when they pulled out all the stops at their album release party Sunday night at the beautiful Varsity Theater. It […]