Flugtag translates to “flight day”.  That’s a misnomer.  Huge crowds routinely show up for one of Red Bull’s signature events.  But they’re not really there to see the flying.  They’re in attendance for the crashes.  And it works.  If you’ve ever found yourself laughing at Jack-Ass stunts or sneaking a peak at viral videos of bloopers, you understand the appeal.  What you get when you scale it up, is Red Bull’s Flugtag.

Flugtag is a world wide phenomenon that first took place 27 years ago.  Since then, it’s entertained millions. These days Red Bull stages three of them around the world each year.  The competition for a city to get the bid is intense.  It’s a huge undertaking.  Saturday was the second time the event was staged on St Paul’s Harriet Island.  I have no estimate for how many people attended the event.  The park itself was quite busy.  Boats lined the course. Looking across the river one could see large groups of people in Upper Landing Park on the downtown side of the Mississippi.  Balconies on the housing complex across from Harriett Island had people festooned up and down the side of the buildings.

Best of all, the event was family friendly and free.  Large video screens were strategically placed about the spectator area so that everyone could get a good look at the action.  Otherwise, the lack of bleachers would have made it difficult for spectators to see the destruction unless they arrived early enough to stake out a spot right along the river.

Flugtag is in so many ways, the antithesis of Red Bull’s identity with extreme sports.  Gatherings that bring together some of the most daring athletes on the planet.  No sponsor deserves more credit for blowing up the popularity of skate boarding, motorcycle stunts, or flips in the half pipe.  Flugtag is extreme.  Yes.  But athletes?  Nahhhh.  Apologies to former Viking Chad Greenway who participated on a team.  He proved, without a doubt, that athleticism has nothing to do with it.

So what’s the purpose?  Well, the rules are pretty straightforward.  Teams of 4 or 5 members design and build a craft which is ostensibly made to fly.  Red Bull gives you wings, right? Ostensibly being the operative word here.  The un-powered craft can be no more than 24 feet long, 20 feet wide, 10 feet high and can weigh no more than 400 lbs, counting the weight of the pilot (insert kamikaze here).  Given that many of those pilots weighed, as the Brits would say: “many stone”, there isn’t much to the flying contraption.  A couple craft disintegrated before even reaching the end of the launch ramp!

A ramp is set up over the Mississippi on a moored barge at a height of 30 feet.  In Saturday’s case, a last minute decision was made to half fill the barge for stability which reduced the launch height to 23 feet.  That’s a material difference and, as we’ll see later, likely influenced the final results.

One person climbs into or onto the craft, the other team members push it on some type of wheeled cart as fast as they can off the edge.  It either flies (unlikely) or plummets directly into the river, shedding parts on the way before smashing into pieces when it hits the river.  Then for good measure, the pushers leap into the river as well.  Everyone is quickly picked up by surf style jet ski trailers, handed a towel and trundled off for an interview.

But the competition is not just to see who can fly the farthest.  Interestingly, the distance is the point at which the pilot enters the water, not the craft itself.  So you see a number of attempts by intrepid pilots to leap from their doomed crafts before contact in an attempt to gain a few more feet.

There are two additional scoring criteria.  The first is creativity.  How much fun (or science) went into the construction of each entrant?  Some of these were wildly original. The second is showmanship.  Each team gets about 30 seconds, pre-flight on the ramp, to dance or present a short skit.  Ladies and gentlemen, let’s be kind here.  I saw no one destined for a future on the stage or screen.  In fact, it often seemed the lamer the skit, the better it was.  After all, what good would it be to see a highly choreographed dance before watching the star of the show simply plummet from the end of the ramp into the water?

Prior to the competition, fans have the opportunity to view all of the creations and hell bent for leather nerds up close in the hangar area.  I quickly surmised that you had two types of teams.  Drinking buddies and engineering types.  For the former, Flugtag provides a spectacular opportunity to make a fool of yourself in public.  There’s great appeal in that.  The latter actually put time and effort into the design in hopes of breaking the existing world record, which by the way is a whopping 258 feet.  Off a 30 foot ramp, that’s Wright Brothers type flying!

The crafts spanned the gamut of just about every flight theory in history.  And maybe some that hadn’t been relegated to the dump heap yet.  Most common was the cantilevered wing, designed to create lift by tapping into Bernulli’s Principle.  Remember that one from high school?  If not, just look at the wing shape next time you’re at the airport.  The second common approach was the kite concept.  Think of those hang gliders you see soaring off mountain peaks.  Finally, there was the rotary wing, or helicopter approach.  However, without power that one was pretty well doomed from the start.

As I said, some of the teams were dead serious about distance.  I talked with the team from Lexington, KY flying their Infinity Wing.  They explained to how their biplane, tail-less craft with a movable leading foil would stifle the competition.  Attached to a strut near the pilot’s head was what first appeared to me to be a rain gauge.  I was quickly disabused of that assumption.  In fact, it was an anemometer, to allow the pilot to judge air speed.  The objective was to allow the craft to accelerate toward the water (I’d call that crashing) until it reached a speed of 30 knots.  At that speed, the pilot would slowly raise that leading foil to transition the craft from downward momentum into forward momentum where those two Bernulli designed wings would provide lift and carry them merrily down the Mississippi.  The designer expressed a bit of concern of the lowering of the ramp height from 30 feet to 23 feet, as mentioned above.  The concern was well founded.  Infinity Wing may have reached the desired 30 knots.   About one hundredth of a second before it buried itself in the river.

When all was said and done only three or four of the thirty eight entrants managed anything resembling flight.  Only a couple broke the 60′ barrier.  St Paul did not threaten that 258 foot record.  But local fans were delighted that the championship finally went to the last to fly, St Paul’s own Spooners Revenge which managed 54 feet with style.  This rag tag bunch first competed the last time Flugtag came to St Paul in 2010.  They took second.  Akin to kissing your sister.  That spot burned a hole in their collective guts for nearly a decade.  So when 2019 rolled around, the same team re-formed.  Older, wiser and still nerds.  Flugtag champions! 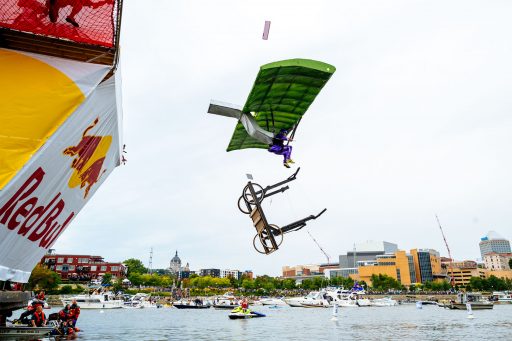 As I left the grounds, with a couple youngsters in tow, I found myself asking  deep philosophical questions.  Why?  Why go through all the logistics, expense and preparation to stage a Flugtag?  Why would anybody participate?  Or attend?  I came up empty.  It’s just silliness on a grand scale.  But you know what?  Silliness and spectacle brings people together.  Fun is contagious.  I’ll do it again in a heartbeat.

Thanks, Red Bull.  Corporate sponsors with a sense of humor are in short supply.

Satellite Radio provider Sirius XM introduced a new segment on its AltNation channel a few weeks ago “Advanced Placement”. The show highlights new releases and bands that are becoming popular. 3 of those bands are […]

Skeletonwitch exploded on the Turf Club Friday night as part of their recent tour promoting their latest album “Devouring Radiant Light”. The venue was packed and the audience was ready to party hard on the […]