The Victory Lap tour will be making a stop at The Fine Line Music Cafe on Thursday, March 1st and to say I’m excited would be an understatement. Although there are only three bands on the bill, each of the bands has a very unique yet powerful sound that will definitely spice up your Thursday and get you in the mood for the weekend.

Headlining the night is Propagandhi. Since forming in Manitoba in 1986, Propagandhi have brought an emphatic anti-fascist message to their music. Along with addressing a number of personal losses suffered in recent years, their new release Victory Lap, the band’s first full-length since 2012’s Failed States, finds the band facing a landscape in which fascism is—among a certain crowd—suddenly trendy. Victory Lap also marks Propagandhi’s first album with new guitarist Sulynn Hago, who joins Samolesky, frontman Chris Hannah, and bassist Todd Kowalski. Replacing longtime guitarist David Guillas (who appears on several tracks on Victory Lap), Hago was added to the lineup after Propagandhi put out a call for audition tapes and received over 400 responses. You will definitely be hearing some tracks from this new album on Thursday but also some old songs that will take you back to your angsty teenage years. 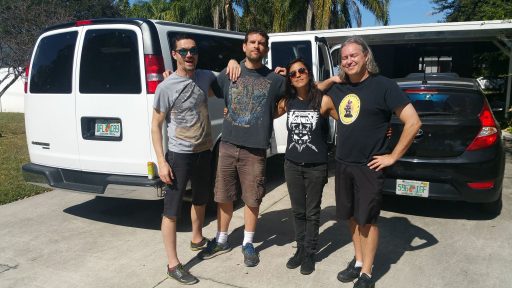 Opening for Propagandhi is a personal favorite of mine- Iron Chic. While the more obvious side of punk rock tends to be its discontent, New York’s Iron Chic use their melodic punk to evoke the genre’s sense of community and oneness unlike any other. Formed in 2008, the band cultivated a driving and infectious sound packed with so many singalong choruses and who-oh-ohs that it’s hard not to want to dive in and be a part of the action. Pair a sound like that with songs whose lyrics tackle the disappointment, angst, and uncertainty of life, and you have a virtual maelstrom of emotive and engaging punk reminiscent of bands like the Bouncing Souls.

Kicking off the night will be La Armada. Formed in the Dominican Republic, during two separate pseudo-democratic dictatorial governments, the idea of the band started with the need to denounce both government and catholic dogma that is the daily bread of Dominican society. Since their beginnings in the year 2000, La Armada has been taking things into their own hands with a no-nonsense approach to their craft. Their music showcases an unheard of mix of punk, hardcore, metal and native Caribbean rhythms that the band affectionately calls “Latino Hardcore Fury”.

This show is sold out.