Spring 2016 is shaping up quite fast and furious for the hard rock and metal scene. With the Rock on the Range and Welcome to Rockville lineups already revealed, it’s now time for second year veteran Northern Invasion to take the spotlight. 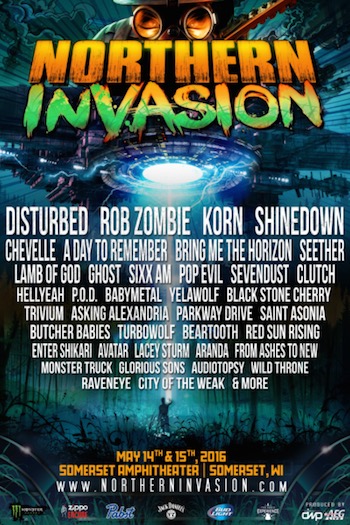 After a stellar debut year in 2015, the Northern Invasion festival will expand to two days in 2016, and with dominate the weekend of May 14 and 15 as it returns to Somerset, WI. Leading the top of the line-up are artists Disturbed, Rob Zombie, and Korn.

We reached out to Korn’s publicist who responded with a quote about this year’s headlining venture. Korn’s James “Munky” Schaffer was quoted in saying “Areee Youuu Readyyy!!? Come rock with us in the Great White North. Korn can’t wait for the Northern Invasion!”

In the coming months leading up to Northern Invasion, look for additional previews on Twin Cities Media that will highlight the upcoming event.

Bands come and then they go. That’s just how rock and roll works. On some very rare occasions, they come back, and I am oh-so glad these guys came back. On the same day of […]

When I (and the rest of the Twin Cities) stumbled upon Bruise Violet in 2015 I fell head over heels for them. The music, the lyrics, the whole attitude of them band just won me […]