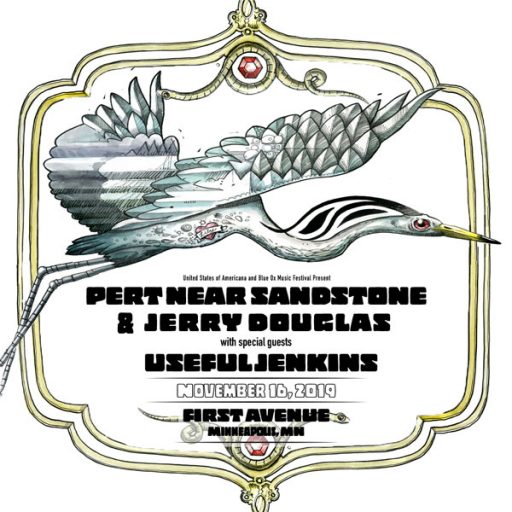 On November 16th local legends Pert Near Sandstone will be taking the stage at First Avenue alongside Jerry Douglas and Useful Jenkins. The three groups will be providing their own twists and flavors of bluegrass and folk as they share this evening in downtown Minneapolis.

Pert Near Sandstone started out in a Minneapolis basement a little over ten years ago, and since then has managed to produce a half dozen albums. Their most recent album, Discovery Of Honey, came out in 2016 and they have managed to stay fairly busy with performing at great venues like the renowned folk/Americana Telluride Bluegrass Festival in Colorado, as well as performing with hot names such as the fellow Minnesota-based group Trampled By Turtles all the way to the likes of Yonder Mountain String Band and Del McCoury. Their sound has been described as Appalachian, folk, bluegrass, and beyond.

Joining Sandstone will be GRAMMY winner Jerry Douglas as well as another local group known as Useful Jenkins. Douglas will be bringing out his lap steel guitar tunes, while also giving us a taste of what has earned him the title of “the Jimi Hendrix” of the resonator guitar. Two unique instruments with one brilliant musician will provide an experience second to none. Useful Jenkins, based out of Mankato Minnesota, will also be featured that Saturday evening. Jenkins brings a bluegrass/grass-roots sound to the stage with their genres ranging from folk to even hip-hop at times. They are known for their energy, 3-part vocal harmonies and an army of stringed instruments that range from a violin to an electric bass.

No matter the artist that catches your attention from this fantastic trio, we are in for a folking great time so don’t miss out!

And in the meantime, here’s a taste of what is to come!