It has been far too long since I last stopped into the Turf club for a concert, the last band I saw there was Murder By Death. Precisely that is what brings me back to this venue once again as last month Marah In The Mainsail opened up for Murder By Death in Minneapolis. Now I find myself getting to know this local band that has been hidden from me up until that point. The theme of the night was the future and along with that there are all those new pieces that comes with it. As people walked in the door they were greeted with those aspects right away. New merch was sprawled out on the table and that lovely free poster they were handing out for this special show. 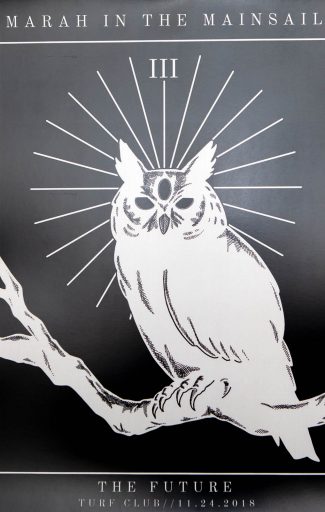 City Pages best new Minnesota band, Gully Boys, took to the stage first. This tightly knit three piece wove their instruments together with all three of their voices joining in from time to time to fill out the sound more. The song Greasy was the one that stood out to me the most. Those vocal melodies over the tom filled drum lines which were adorned with fuzzy guitar riffs all while being backed by warm bass tones make for a nice combo. Their performance leaves no question as to the strong rating they received on the City Pages poll for best new Minnesota band this year.

Marah In The Mainsail have been making some alterations to their band and we got a glimpse into this future that is yet to fully transpire. This new era encompasses changes such as to whom the instrument duties fall upon when performing live shows. The keyboard makes a welcome appearance once again as Cassandra Valentine sheds the bass for the majority of the songs in favor of the keys while still retaining a singing role. The band has also added accented stage lighting to bring along when they head out on the road again. Since they have recently severed ties with their booking agency,  setting up out of town concerts have slowed for the moment. This temporary halt in touring didn’t deter folks from trekking out to Saint Paul to see them play on Saturday night. Fans flocked from far and wide, out east and west and “practically Canada” as one excited attendee proclaimed. Front-man Austin Durry was gracious to have all these people put forth the effort by traveling near and far to see the band play on its home turf during this temporary lapse in touring.

With a new album in the works, the crowd was treated to 5 new songs that let the listeners in on the future that awaits their ears when the new album is released. There were a few moments where the stage extended out to the crowd as when bassist/percussionist Austin Wilder marched down the steps beating the bass drum through the densely packed venue. He was so grateful for the chance to dance with the fans that he eventually sent the drum out over the crowd to return the favor.  As the crowd surfing drum made its way across the hands of smiling fans, others would take the opportunity to bang on the drum to the rhythm of the music. Fellow band member, John Baumgartner, then followed suite and took his trombone out to the bar area to join in the fun among the crowd.

It was a fun night of hearing two great local bands ply their trade up on stage. The local Twin Cities music scene always has something new to be discovered, I came in following one that I recently discovered and left with another. In case you missed this show or miss them already, Gully Boys have another local show coming up on December 1 at the Nomad World Pub in Minneapolis.

Toad the Wet Sprocket is a band that falls in the “been there, done that” category. Founded in 1986 their heyday was in the 1990 with several platinum albums and the hit singles to go […]

So Glass Animals was at the Fine Line last night. Yup at the very sold out Fine Line, when First Avenue’s Mainroom stood empty. But you know what………..dang if it didn’t work! There was no […]