If the whole “A boy and his guitar” gig does not work out, Passenger aka Michael David Rosenberg will have a brilliant future as TV host or comedian. The 31 year old British singer / songwriter performed at First Avenue Tuesday. The show was well attended, even though “my mate Ed Sheeran” was performing at the same time across the river in St. Paul.
Passenger’s stage setup is simple: Singer – One, Guitar – One, Lights – many. And it works quite well. The lights – a combination of his and First Ave House lights were great. The sound well suited to his style. Background singers were not needed. In keeping with modern times they were crowdsourced to the audience, many of which sang along to each song, knowing all the words. 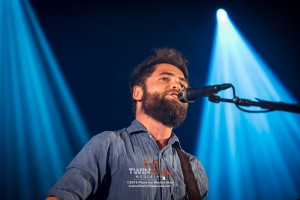 Rosenberg took time between songs to connect with his fans, accepted a gift from the front row and used his quick witt and storytelling to create memorable experiences. 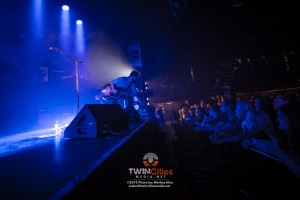 Responding to a shout of “I love you!” from the crowd, he felt things were moving a bit fast and if they should not get coffee first. He apologized to anyone who mistook his hit “Let her go” for Frozen’s “Let it go” and was expecting a cartoon character, then did an impression of a pissed off 9 year old finding out she would not be hearing “her” song.
His songs were well delivered and received by the crowd. Overall, this was as good a show as I have seen a single person act deliver and a great way to spend a Tuesday evening.

According to the protesters outside the Xcel Energy Center yesterday, the devil had come to St. Paul to steal our souls through rock’n roll. I imagine there are many bands that would be much better […]