If you thought last year’s Northern Invasion broke new ground, this year’s line-up will take you to a totally different level. The year of waiting is over as the official line-up for Northern Invasion 2017 has been released. From the press release today:

Soundgarden and Kid Rock will headline the third annual Northern Invasion, Saturday, May 13 and Sunday, May 14 at Somerset Amphitheater in Somerset, WI.

Northern Invasion hosts the biggest rock bands for over twelve hours each day on three stages, and offers a top tier campground experience. In 2016, Northern Invasion expanded to two full days, with over 45,000 in attendance. 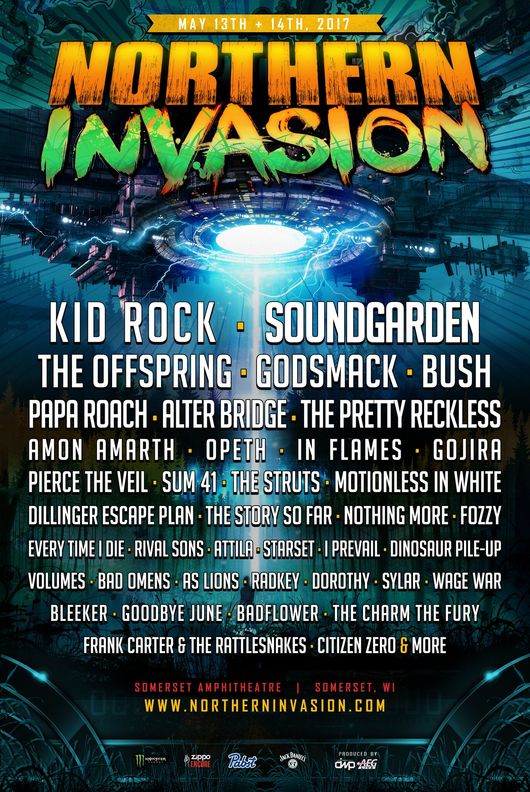 “Looking forward to bringing the Smack to Northern Invasion,” said Godsmack’s Sully Erna. It’ll be awesome to share the stage with so many great artists.”

Gavin Rossdale of Bush said, “We are so excited to come play the Northern Invasion. So many killer bands I want to see…starting with Soundgarden. We plan on bringing the fire.”

Presale weekend tickets and layaway packages, as well as hotel, camping and VIP packages, are available for purchase starting Tuesday, December 13 at 10:00 AM CST at www.NorthernInvasion.com. The layaway option allows purchasers to split the cost into four monthly payments.

Those looking for an expanded festival experience are invited to purchase hotel, camping and VIP packages. Available camping packages (RV and tent options for 3 nights) include Groupie, Roadie, Star, and Ultimate Package at Float Rite Park. Hotel packages offered for 3 nights are: Bronze, Silver, Gold, and Platinum. All camping and hotel packages include a $25 festival merchandise voucher for each person. For details on each package, visit:www.NorthernInvasion.com.

The Northern Invasion public onsale is Friday, December 16 at 10:00 AM CST. Beginning at that time, ticket prices will increase, so fans are encouraged to buy during the presale. At the public onsale, prices will be as follows:

As in the past, General Admission ticket discounts will also be available for active military through Northern Invasion partner GovX (www.govx.com).

Northern Invasion is supported by our rockin’ sponsors: Monster Energy, Zippo, Pabst Brewing Company, and Jack Daniel’s. These partners, along with many others, will feature interactive experiences, artist meet & greets, and other unique fan engagement opportunities throughout the festival.

Avenged Sevenfold arrived into Minneapolis a little ahead of Saturday’s US Bank performance. They have decided to play a small gig to get the blood flowing again. The world famous First Avenue and will host the […]

A Conversation with Garrett Nickelsen of The Maine

The Maine is a band that seems uninterested with the expected. For almost ten years now they’ve continually marched to the beat of their own drum – blurring the lines of genres and scenes, experimenting […]

School For Girls warmed the stage for Adam Levy on Saturday night at the Cedar Cultural Center. The band is made up of veteran musicians and theatre performers based in Minneapolis.  Brought together by a love […]