The metal year in Minneapolis has seen some great shows thus far. The worldwide phenomenon known as Nightwish summoned a huge sold out crowd at First Avenue on Monday night for their Endless Forms Most Beautiful Tour performance. Though media surrounding the band is often quiet, this has no reflection on their extreme success. Their record sales and their shows around the world are a clear marker of their loyal fan base and success. Joined by openers Delain and Sonata Arctica, the SOLD OUT performance was set to be quite an experience 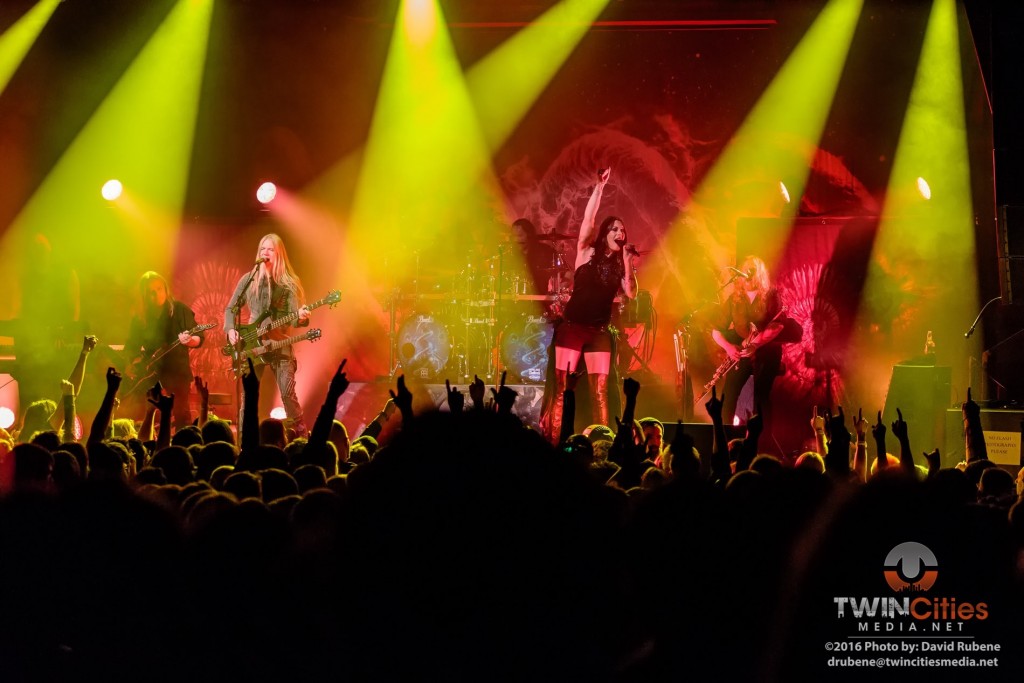 Dutch symphonic band Delain kicked-off the evening with a powerful set! Bringing a rock and roll flair to the genre, each member of Delain played with smiles on their faces and an immense amount of passion and energy. The set list ran through all the fan favorites including songs from their latest album, Lunar Prelude, a great mixture any Delain fan can appreciate! With smoke machines and beautiful lighting, the stage absolutely came alive. Charlotte’s vocals were powerful and resonated around the entire venue.

A quick stage change and Sonata Arctica was ready to take the stage. The Finnish metal band put on a brilliant performance full of excitement and vigor. Fans were absolutely thrilled. With the band being so engaging, the audience members were certainly pleased as each song in Sonata Arctica’s set unfolded. Sonata Arctica ran through a fun and almost danceable set list, with a stage presence that found itself quite inviting. Crowd goers sang and jumped with the band, and overall enjoyed the band’s performance

The buzz and anticipation grew extremely high as Nightwish prepared to take the stage. As soon as the lights dropped, First Avenue roared. Right from the very first notes of the intro, before even any band member had entered the stage, the fans went berserk. It was certainly one of the louder evenings I have witnessed at First Avenue in a while. When Nightwish finally entered the stage the roar of the crowd got even louder. The energy was right there and Nightwish gave it back to the fans. The songs were mainly focussed on the later part of the band’s 20-year career and only ventured back into ancient history later in the set. However, the fans didn’t seem to mind. New front woman Floor Jansen was more than welcomed and rightly so. Her performance proved that she is one of the genre’s best vocalists and entertainers. Her stage presence and her charisma are quite enigmatic. She certainly knows how to rock and how to move the crowd. With Floor becoming part of Nightwish, it has given the band their most metal and most straight forward, in-your-face appearance, and has strengthened the band’s continued success.

Nightwish put on a great show with lots of high energy and, of course, also with lots of melody and drama. The band really enjoyed themselves, smiling all the way through, interacting with each other and the fans constantly and, of course, playing lots and lots of monumental songs. Nightwish also managed to transfer their joy onto the fans. I cannot remember a concert where so many left the venue with the brightest smile they can show. The performance was more than an exhilarating evening. It was a night for fans new and old to remember.

The Band of Brothers Road Show: How American Authors And Co. Raised The Bar At The Varsity

It was an insanely freezing night in Minneapolis when I found my Uber pulling up to The Varsity in Dinkytown, Minnesota. In store we had the emergence of the Band of Brothers Road Show, consisting […]

One of America’s most revered live bands remains the Drive-By Truckers.  A sold out Mainroom has been their home on Twin City stops for years  This time around, they’ll hit a bigger venue in the […]

Saturday offered a full day of activities and competitions as the X Games were in full swing at US Bank Stadium. Australia continued its quest to conquer it all with Logan Martin winning the gold at […]