Nick Mason’s Saucerful of Secrets tour landed in town last night.  For hardcore Pink Floyd fans it was likely just what they were hoping for.  For those of us who jumped on the ship when the band delivered Dark Side of The Moon in 1973, it was a revelation.

I admit to being intrigued when I headed to this show.  The reviews I’d read indicated it was special.  A fellow TCM writer caught the band a few days earlier in Denver and relayed to me that I needed to get ready to be stunned.  But there remained this little voice in my head that kept ticking off the things that might work against it.

-This wasn’t Pink Floyd.  It was only the drummer for crying out loud!

-This wasn’t Pink Floyd.  This wasn’t going to be some kind of tribute band, was it?

-This was all pre-1973.  The Syd Barrett years which I’d always found a bit dense and inaccessible.

It did not take long to dispel any of those worries.  The State was packed and this crowd was just buzzing.  I can assure you that while there may be enough post ’73 Pink Floyd fans to fill the Xcel Energy Center, there were certainly enough who were dedicated enough to be there for the early stuff.

Why the tour?  Nick Mason simply indicated that he felt the need to once again perform.  The last time he’d come to North America was a one off in 1994 on The Division Bell tour. “I knew I couldn’t play ‘Comfortably Numb’ better than David or Roger, or indeed even the Australian Pink Floyd [tribute band],” Mason told Rolling Stone magazine. “It became a matter of finding something else that engaged us.”  The albums spanning the period 1967 through 1972 did just that. 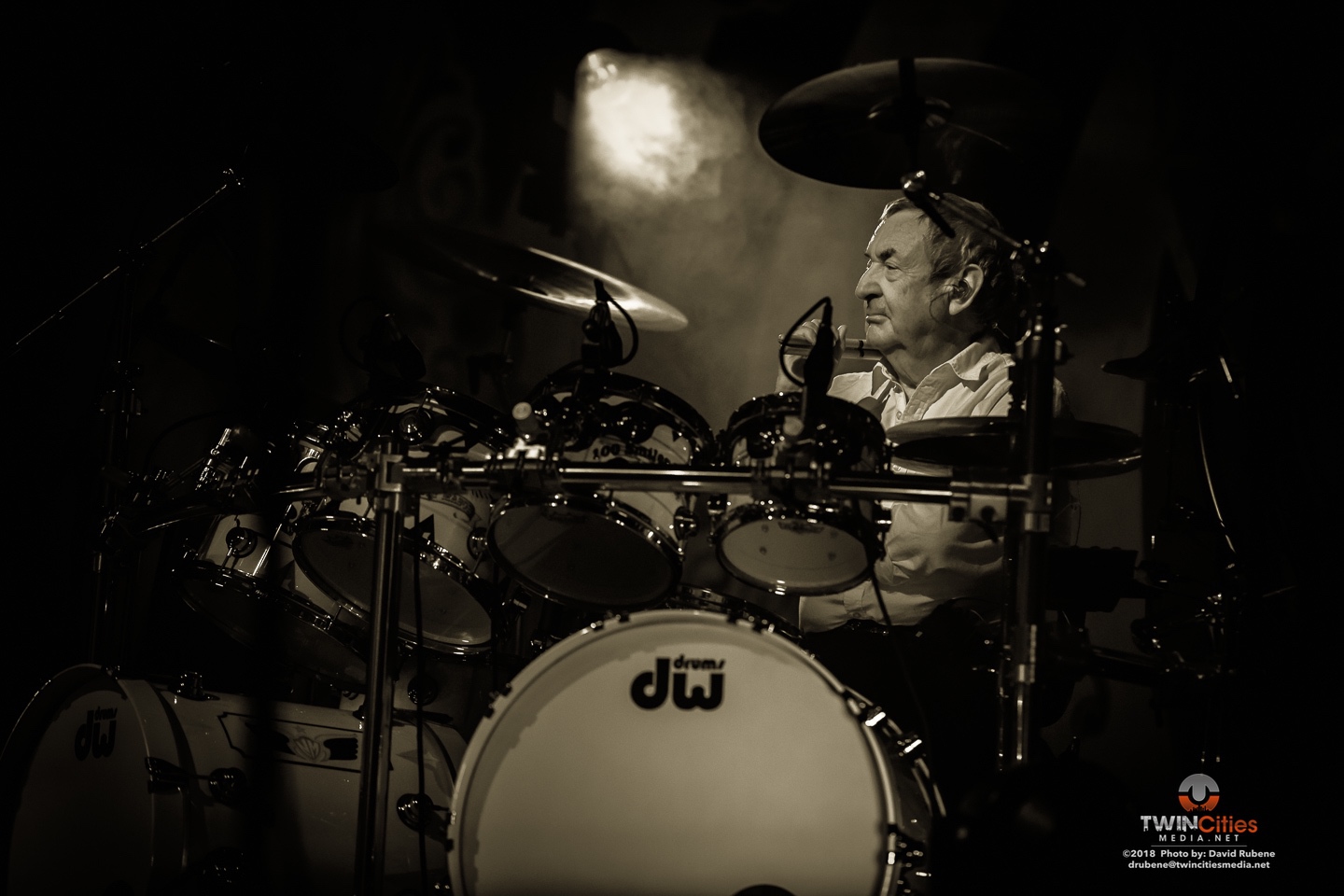 When Mason and band mates Gary Kemp (Spandau Ballet), Pink Floyd touring bassist Guy Pratt, guitarist Lee Harris from The Blockheads and keyboardist Dominic Beken walked on stage, the auditorium erupted.  Fans leaped to their feet before the first note was struck.  I quickly realized I had a lot of catching up to do.  While I was somewhat familiar with that early catalog, I was in the minority.  This audience knew exactly what was coming.

During the period covered during the show, from the band’s founding in 1965 to their first album Piper At the Gates Of Dawn in ’67,  Pink Floyd released 6 albums (7 if you count Ummagumma, which even most Floyd fans feel obligated to discount).  After Piper came Saucerful of Secrets, More, Atom Heart Mother, Meddle and Obscured By Clouds in 1972.  While I can not tell you exactly what every song on the set list was, to the best of my knowledge, each album except Ummagumma was sampled.

The band went right back to the beginning, opening with Interstellar Overdrive from 1967’s Piper At The Gates of Dawn.  The sound was huge and trippy.  The stage and lights something I haven’t seen since the huge 70’s tours of bands like Yes or Genesis.  1967?  Are you kidding me?  Bands were this far down the road in 1967?  We were listening to The Mama’s and Papa’s or Monkees here in the US.  Those guys were communing with the music of the spheres.

I found myself reflecting on how the rules governing music were different back then.  Bands were not only allowed to chart new sounds.  They were encouraged to do so.  While popular music was still governed by AM radio and it’s time formats, there was a scene going on, particularly in the UK, which was never intended for commercial consumption.  The more boundary expanding and experimental it was, the better.  Nobody did this better than Pink Floyd.

Remember that this was also a time where the concept of consciousness expansion was taken seriously.  Hallucinogenics, meditation and other fairly radical modes of self discovery were very much in vogue.  Certainly, those of us who came of age during the early 70’s understood the connection between music and mind altering drugs.  Those black lights, state of the art stereo systems and clouds of bong smoke were so common they can be considered a cliche’.  Last night I was reminded that it wasn’t just the cannabis that made it work.  It was the time and willingness to sit and actively engage with the music that was simply enhanced by what was burning in the bowl.  Much of what I heard last night was breathtaking musical composition, heavy, challenging, ethereal and complex.  It stood the test of time.

And who needs the black lights when you’re trucking in a multi million dollar stage show?  Thank you.  If you’re going to do it right, do it right.

Any worries I had about whether this was in some way a high end cover band were quickly dispelled.  First of all, Pratt is genuine Pink Floyd, as is Mason.  You can’t reproduce a rhythm section.  The other three were incredible musicians and my impression is that this was music that absolutely challenged them.  They were chuffed to get a shot at it.  Second, it was obvious that they all thought very highly of Nick Mason.  When Mason addressed the audience he was self- deprecating and humble.  He has a reputation as one of the real gentlemen of the rock and roll world and all of the band seemed delighted to be with him.

But I think the aspect I admired most was the overall attitude.  Pink Floyd was a stage production band.  Not much was done on stage during their heyday.  They played, brilliantly, and let the theatrical aspects of the stage show sell the visual.  I carry mental images of Waters and Gilmour looking like stoic rock gods, as smoke and color wreathed around them.  Pratt, Harris, Beken and Kemp were all performers.  They’d have been a delight to watch even without the whirling lights and backdrops.

If it makes sense, I’d also say that they did not take themselves too seriously.  All of them have earned their due.  The days of pointless posing and rock star image were long gone.  They smiled, engaged and challenged each other musically.  When they pulled off things that few bands would have ever attempted,you could see the satisfaction on their faces.

My strongest impression was that this show was all about the late Pink Floyd founder and front man Syd Barrett.  Much has been written about his wildly creative genius, his struggle with drugs and descent into madness.  But as with any human being who has struggled with mental illness, I am sure the story is much more complex.  Mason made sure he was given credit for the music.  I have seen Gilmour and Waters perform, now Mason.  Each has spoken lovingly about Barrett.  Often, when a band member or leader becomes addicted or runs off the rails you hear some bitterness for derailing a good thing.  Or a tendency to publicly spat or distance oneself.  That’s not the case here.

As I pondered that and listened to the music, I could literally hear the mind of Syd Barrett in the songs the band offered.  There was beauty, there was threat.  Undeniably, there was a reflection of a man knowing that his grip on reality was at risk and fading.  I listened to the achingly beautiful If, from the 1970’s Atom Heart Mother,and was nearly devastated by the lines:

“If I were to sleep, I could dream
If I were afraid, I could hide
If I go insane, please don’t put
Your wires in my brain

If I were the moon, I’d be cool
If I were a rule, I would bend for you
If I were a good man, I’d understand
The spaces between friends

If I were alone, I would cry
And if I were with you, I’d be home and dry
And if I go insane
Will you still let me join in with the game?”

A song which 45 years ago was just a trippy, psychedelic tune to me, now broke my heart.  Syd knew.  And there was nothing he could do to stop it.  Like Bowie’s Black Star, it was high art trying to transcend the shackles of our mortal selves.  Astonishing and courageous.

In many ways, the evening is a blur to me.  Everything ran together and flowed in the most delightful way.  It was, as Gary Kemp called it, the heartbeat of Pink Floyd.  It was Astronomy Domine, Fearless, Set The Controls For The Heart Of The Sun and the thundering Meddle classic, One Of These Days.  We even got Vegetable Man, a half finished oddity, which Mason assured us had never been recorded or played live until the current tour.

An encore of Saucerful of Secrets and Point Me At The Sky.  An hour and forty five minutes had literally flown by.  I walked back up the aisle knowing that my next task was to dig up all those albums and to take the time to actively engage with them.  And for those who are looking for a deeper dive like me, I’m going back to Wolfgang’s Vault to listen to Pink Floyd’s first American tour at Bill Graham’s Fillmore West.

If you’re not familiar with the Vault, here you go.

Maybe there’s a reward, after all, for those who make it to the end of an article.  See you at the next rock show!

In his own words, there was no way he was going to be able to recreate and deliver later band hits at the same level as being done by Roger Waters or David Gilmour.  So he decided to resurrect the earlier catalog and to give it its due.  I am glad he did.

The original Pink Floyd was Mason on drums, Waters on bass,

My bucket list is vanishing quicker than I would have ever imagined and it has honestly left me floored. Last night was one of those shows that, while watching one of the few bands left […]

The Ike Reilly Assassination kills it at First Avenue

The Ike Reilly Assassination played a charity show with all proceeds being to the East Side Neighbourhood Services Wednesday night at First Avenue. The first band out of the gate were Rich Mattson and the […]