Danish pop-punkers New Politics will be making a stop at the newly re-opened Varisty Theater in Minneapolis on Thursday, February 22nd. It’s been a couple of years since I’ve seen these guys but to say I’m excited would be an understatement. With an undeniably infectious sound and truly electric and exciting live show, this will be more than enough to get you ready for the weekend. New Politics  currently consists of David Boyd, Søren Hansen, and Louis Vecchio. The band’s sound has been described as a blend of punk, pop, and electronically induced dance rock. They have released four albums: New Politics in 2010, A Bad Girl in Harlem in 2013, Vikings in 2015 and Lost in Translation in 2017. Thursday night’s show will be part of their “Lost in Translation Tour” which, go figure, is to promote their newest album but don’t worry, I’m sure they will play all of the classics also.

Supporting New Politics will be rock trio DREAMERS and California based The Wrecks. We caught the Wrecks at the Fine Line the last time they were in town and they are a fun band to watch. Be sure to come in time to catch their set 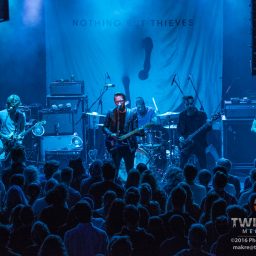