It’s been a good week for my fascination with opening bands so far and it’s only Tuesday. Sunday brought me “In the Whale” at the Varsity and Monday I got to experience Canadian duo “Moon King” warming up the crowd for Youth Lagoon.
The night started off slow with only a few people in First Avenue’s main room which pushed the opening set back a few minutes. The lackluster reaction when the band took the stage prompted singer Daniel Benjamin to prompt the crowd to re-do their cheers more to his satisfaction. Moon King clearly had their work cut out for them, but they were up to the task and then some. 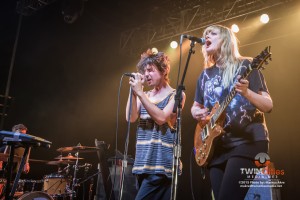 Swinging his mike stand around with an energy that would make Morrissey proud Benjamin took the lead on the opening song with guitarist Maddy Wilde starting off in the background. By the 2nd song she was up front and center adding her voice to create some interesting harmonies. The energy level was infectious and bit by bit the crowd was won over. By the 4th song there were loud cheers and people pushing up to the stage.
According to the band, this was their biggest show of the tour so far.
I enjoyed the mix of poppy and psychedelic sound. Overall I was impressed by Moon Kings performance and professionalism.
Check them out on
Facebook
SoundCloud
BandCamp

Lukas Nelson & Promise of the Real packed the Varsity Theater for a Wednesday night show on the campus of the University of Minnesota. While initially gaining recognition as Willie Nelson’s son, Lukas has proven […]

It was another night where there was far too much going on in the Twin Cities for me to list. I headed downtown a little early to try and catch some of the Prince festivities […]

First Avenue’s annual Replacements Tribute show sold out like it does every year.  For many, it marks the beginning of the Holiday Season in a manner in which the namesake might approve.  Not that The […]