With rain in the forecast for Thursday, the X Games updated their schedule for the one event that had been scheduled outdoors. The Vert Skateboard qualification rounds were moved from Thursday afternoon to Wednesday. The finals are now scheduled for Thursday starting at 9 PM – look to  the heavens and the X Games app for updates. The change gave me an excuse to pick up my credentials a day early and check out some of the training sessions.

Here’s a big disclaimer for all our X Games coverage. 2/3s of our team wouldn’t last 15 seconds on a skateboard other than going in a straight line.  Our goal is the capture the spirit of the X Games and show you some great photos, rather than recap athletes’ runs and share results. ESPN are varied sports sites are safe from our incursion on their turf (for this year at least).

I spent about an hour before the press conference checking out the various training sessions. The first thought that came to my mind – those athletes are tough. Falls and wipeouts are common in training and seeing them get up, shake it off, and get right back on their vehicle of choice was impressive.

This may be a competition, but there’s a very chill and friendly atmosphere. They cheer when another athlete lands a cool trick and there’s friendly banter all day long.

There was a press conference with several of the key athletes scheduled at 2. 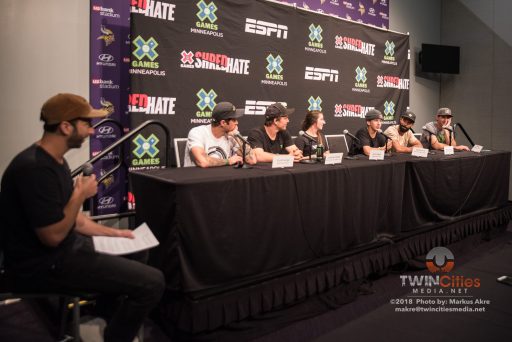 Jack Mitrani, host of X Games Minneapolis introduced the participants and moderated. Some key impression (for me at least)

Jagger Eaton – Skate Park & Street – Competed in his first X Games when he was only 11.

Mykel Larrin – BMX Park, Vert & Big Air – Maintains a healthy diet despite being from Wisconsin where according to Jack “They serve cheese curds instead of bread”

A range of topics came up from injury recovery, the importance of social media, to the inclusion of Street and Park Skateboarding in the 2020 Olympic Games.

This year competitors got to do 3 runs instead of only 2. X Games medal holders automatically are in the finals, so 15 athletes competed for 7 available spots.

Yung Gravy Serves it up Back to Back at the Varsity Theater.

Walking up to the Varsity Theater last night you might think Dave Chappelle was still in town looking at the line of people stretched around the block. A line so long it almost doubled back […]

Article by: Colton Davis Photos by: Markus Akre Saturday was an evening of bluegrass at First Ave.  Minneapolis band, The Last Revel, started the night off with a showcase of talent. Each member of the […]

Coheed And Cambria have just hit the road with Mastodon to take part in the The Unheavenly Skye Tour.  The tour name is an amalgamation of Coheed & Cambria’s latest album The Unheavenly Creatures and […]