New Jersey singer-songwriter Michale Graves will be making a stop with his band at the Uptown FWV 9/30 for an electric, and haunting evening full of costumes, rock, and spooks. Graves, best known as the lead singer for the 1990s re-incarnation of the Misfits from 1995 to 2000, will be performing and celebrating the music of Misfits albums American Psycho & Famous Monsters during this tour.

If you are interested in getting tickets or VIP upgrades, you may do so HERE.

“Michale Graves cemented his reputation as one of the leading lights of horror rock when he became vocalist for the iconic punk band the Misfits after they reunited in 1996. As a young teenager, Graves cut his teeth singing with local punk acts, including Bambi Slam (aka Social Outcast) and Valmont, with little success. But while recording a demo with his band the Mopes in 1995, the studio’s owner told Graves that Jerry Only and O.C. Doyle of the Misfits, who had recently regained the rights to the group’s name, were looking for a vocalist for a new edition of the band. Graves scored an audition with the Misfits, and was invited to join the group in time for their 1996 reunion tour. Graves made his recorded debut with the Misfits on their 1997 comeback album, American Psycho, and also appeared on Famous Monsters in 1999. Graves parted ways with the Misfits in the fall of 2000, though he briefly rejoined the group for some dates on their 25th anniversary tour in 2001.” – Mark Deming. 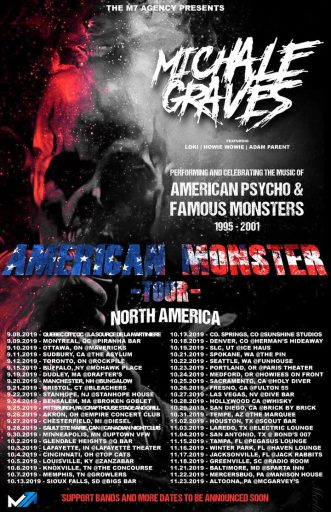