Pandora (NYSE:P), the go-to music source for fans and artists, announced today it will live stream Metallica’s headlining performance at Minneapolis’ new U.S. Bank Stadium on Saturday, Aug. 20. The band’s performance is the first rock concert at the new home of the Minnesota Vikings and tickets sold out in less than 10 minutes. The live stream will begin at 10 p.m. EST on Saturday, Aug. 20. Pandora listeners can tune in the day of and catch it on replay at http://pdora.co/metallicalive. Individual songs from the concert will also spin on Pandora. 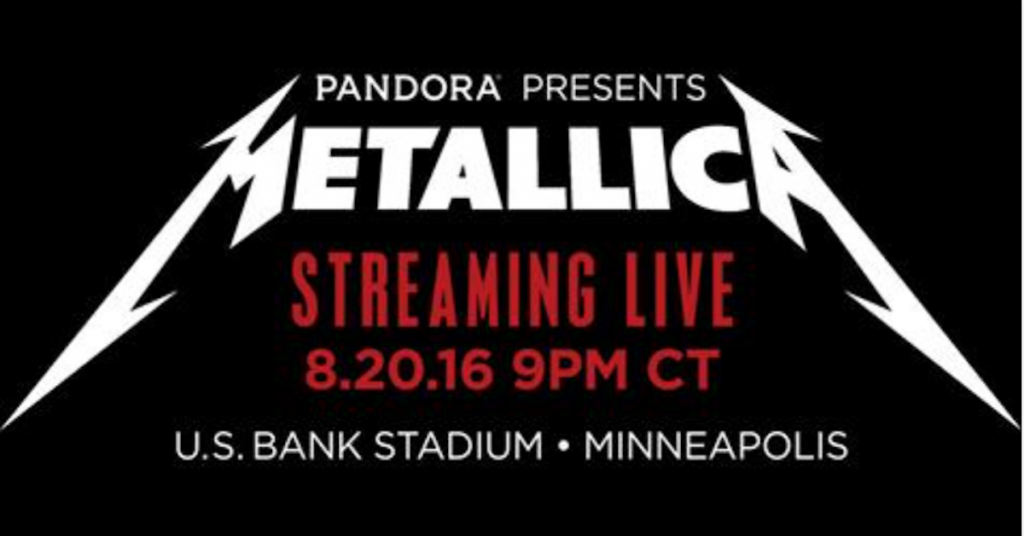 Metallica, who has nearly 2 billion spins on Pandora, also curated an exclusive mix tape in celebration of the show and live stream. The mix tape features songs handpicked by all of the members of the band and features an eclectic mix of all-time favorites and recent discoveries from across the spectrum of music.
“We love being invited to the opening party of new buildings, so when the opportunity to break in the new U.S. Bank Stadium in Minneapolis presented itself, we of course jumped at the chance,” said Metallica’s Lars Ulrich. “Thanks to our friends at Pandora, if you can’t make it to Minneapolis, you’ll still be able to partake in the festivities.”

“Metallica is one of the most successful and influential rock bands in the world. Partnering with them to expand the audience for their live show is a great honor,” said Tim Westergren, founder and CEO of Pandora.  “It’s also another illustration of the power of our platform to connect artists and fans. This is a seminal moment for live music and as a Minneapolis native myself, it’s exciting to be part of the opening of the city’s beautiful new stadium.”

This is Pandora’s third live stream of a major performance and advances Pandora’s mission to help artists grow their careers. Jack White’s sold out show at Madison Square Garden was live streamed to great success and the live stream of Mumford and Sons’ sold out concert at Merriweather Post Pavilion resulted in over a million station adds last year. For more about how Pandora is helping touring artists, visit:

I got some Nooky (Jones) at the Icehouse

You know what’s a sign of a great marriage? When you can leave the house at 930 PM on a Friday night, wave at your wife, tell her “I’m gonna get some Nooky” and she […]