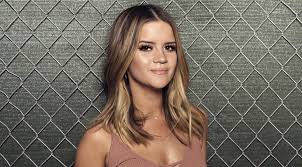 Maren Morris will be bringing her Girl: The World tour to the Armory on Saturday, November 16th. Supporting her on this leg of the tour will be Tenille Townes and Hailey Whitters.

Columbia Nashville singer/songwriter Maren Morris has quickly established herself with vocal styling’s that reflect her country, folk and pop influences. Armed with sheer talent, honest lyrics and a completely magnetic presence, Morris’ label-debut album, the GOLD-certified HERO, released via Columbia Nashville on June 3, 2016. One week after it was available, HERO entered the Billboard Country Albums chart at No. 1 and No. 5 on the Billboard Top 200 Chart, which spans across all genres. With this, the Arlington, Texas native became the first artist in the history of Columbia Nashville to open at No. 1 on the Billboard Country Charts with a debut album in the Soundscan era. Morris’ debut single from HERO, “My Church,” set a record at Country radio by having the most chart reporting stations to play a debut single by a country artist with 107 stations the week it hit the airwaves in addition to being certified DOUBLE PLATINUM by the RIAA.

Fresh off her CMA Album Of The Year win, Maren Morris brought her Girl The World Tour to the Armory on Saturday night. The auditorium was noticeably dominated by women, excited to hear Morris’s “girl […]

Niall Horan to Play at the Minnesota State Fair 8/23

Niall Horan released his debut album, “Flicker”, in October 2017. By far on of the more popular records is “Slow Hands”, Rolling Stones wrote, “(it) rides a slick guitar line as it meticulously unspools its […]