Lucius and the Twin Cities are no strangers, the mutual admiration society was out in force last night at the Fitzgerald Theatre. Lucius has given Minnesota fans some special moments including a show at the State Capitol. Singers Jess Wolfe and Holly Laessig have been busy on Roger Waters tour but the band released a new album “Nudes” last year, so calling the tour “Live Nudes” was a logical choice. And no, they were not going to forgo their usually spectacular stage outfits for what mother nature gave them. Nudes referred to the stripped down versions of their songs the band was performing on this tour.

First up Oregon’s Pure Bathing Culture, performing as a duo rather than their usual full band. Their latest album “Night Pass” is just a few weeks old and their set list was heavy on new music from it. They started out super calm and song selection got more lively as their set progressed. “Ivory Coast” the first song ever written by the band closed out the set.

As I walked into the lobby, I had to stop and laugh as the Yorkie one of the sound techs had riding on their shoulders had taken residence on a pedestal in the lobby and was graciously accepting pets and posing for pictures. 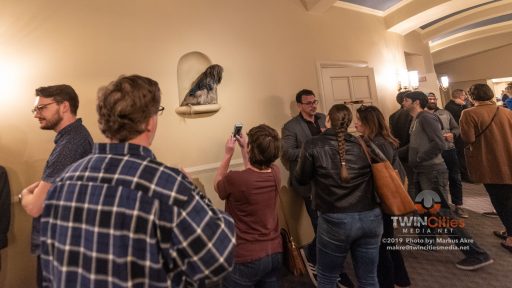 For Live Nudes, Lucius brought along a small string section but the focus from lights to stage design was on Wolfe and Laessig with the rest of the band in dim light. To me there was a distinct Roman Empire vibe to their outfits, red and gold with a hairstyle that enhanced the mental connection.

The stripped down arrangements brought vocals even more into focus than the times I had seen them live before. “Tempest” their second song is one of my all time favorites and was brilliantly done. My favorite moment of the show had nothing to do with music though. Introducing “Feels Like A Curse” with some bits about life on tour and a story how Wolfe spent time before the show drinking bone broth in her dressing room while Laessig went out for oysters and wine (and two fans treated her to dinner) resulted in a serious case of the giggles and it took a few tries to get ready for the sad number. Of course being the professionals they are, they nailed the song once started.

I am never disappointed seeing Lucius and last night was probably my favorite show of theirs. They will be performing again tonight – there are a few tickets left HERE – got get them!

Set List: Dusty Trails / Tempest / Right Down the Line / Something About You / Sweet and Tender Romance / Go Home / Feels Like a Curse / Madness / Turn It Around / Most of What I Know /

How Loud Your Heart Gets / Woman

Encore: True Love Will Find You in the End / Two of Us on the Run / A Dream Is a Wish Your Heart Makes

Chase Atlantic Party Like Rockstars At The Varsity Theater

I can’t iterate enough how much I love going to an all ages shows in Minnesota with a two artist lineup, especially at one of my favorite venues, the Varsity Theater. On a beautiful summer […]

There was a true legend in town last night. Were you there? Did you see him? Sometimes it’s not about going to shows where you know every word or know every riff. It’s okay to […]