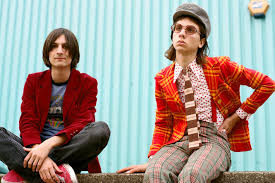 Brothers Brian and Mark D’Addario will be bringing the rock to the First Ave Mainroom as they tour the world in support of their latest release Go to School. Supporting the young brothers will be Jackie Cohen.

Do Hollywood, The Lemon Twigs’ 2016 debut LP, was an invigorating, much-needed blast of fresh air that whipped across the arid landscape of contemporary rock. If that stunningly accomplished recording, which flew in the face of current musical trends, wasn’t surprising enough on the face of it, the fact that Do Hollywood was the handiwork of two teenagers—brothers Brian and Michael D’Addario—rendered the achievement utterly mind-boggling. Now, with the follow-up full-length, Go to School (4AD, out 8/24/18), the siblings, now 21 and 19, respectively, have set the bar dizzyingly high even by their own lofty standards, and proceed to soar over it into the stratosphere. Listening to this wildly ambitious album is like entering and inhabiting a parallel universe.

Go to School’s subtitle is A Musical, and that turns out to be an accurate description of the 15-song extravaganza, which tells the tale of the pure-of-heart chimpanzee Shane, who’s adopted by a childless couple—played by the brothers’ musical hero Todd Rundgren and their mom, Susan Hall—and raised as a human boy. Michael describes Go to School as “a fairy tale with a dark edge,” as Shane is ostracized, bullied and rejected by the girl he falls for, erupts in an extreme act of retribution for being robbed of his innocence. The libretto is played out in a series of intricate, wildly eclectic musical settings ranging from spot-on throwback rockers to traditional Broadway-style production numbers.