It’s hard to be a cool dad these days, but whenever my kids proclaim me out of style, I just remind them who introduced them to an unknown artist with a little song called “Let’s Dance” back in the ancient days of 2008 way before Lady Gaga became a household name. But for all that claim to coolness, I have never seen her live and was looking forward to fixing that this summer.  There was no photo pit and no professional cameras allowed, so I found myself in unfamiliar territory among the common folks clutching a little camera I had bought for my daughter. Well, maybe not so common – the crowd was the most diverse mix of ages and flamboyance that I have seen at a show. Yes, there were plenty of costumes from elaborate Gaga inspired outfits to Avant Garde, from party wear to cowboy hats, from regular dressed couples my age, to a guy in and Adidas track suit (and I don’t think he wore it ironically).

There was no opener, unless you count a 10 minute countdown timer as one. The show opened with “Diamond Heart” which had Lady Gaga wearing a cowboy hat (that explained the cowboy hats in the audience) on a raised platform. The main stage turned out to be a marvel of stage engineering with tilting sections that would also rise and lower, hidden stairs and a trap door that seemed to be spring loaded judging the way Gaga jumped back on stage out of it. The 2+ hour show was divided into segments with videos in the transitions allowing for costume changes. “Just Dance” saw Lady Gaga on keytar (my second in less than a week). 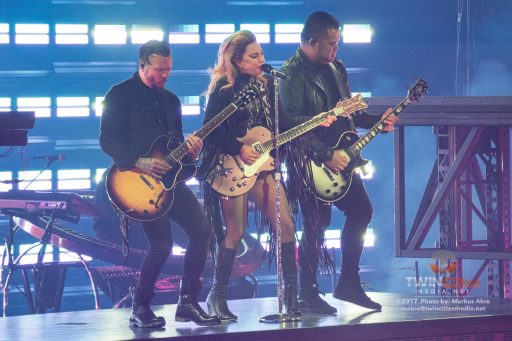 There were light pods on the roof of the Xcel and 3 satellite stages. For “Applause” walkways lowered from the pods and the stages rose from the floor. Lady Gaga and her entourage of dancers paraded across them to the far side of the stage where a piano was set up. “The Edge of Glory” was dedicated to a friends of Gaga’s Emma and her quest to learn to walk after being in a wheelchair. It was a standout moment, where she established and intimate connection with all 16.000 of us at the Xcel, and when she said “God bless you and all your children” it was heartfelt and genuine to me. 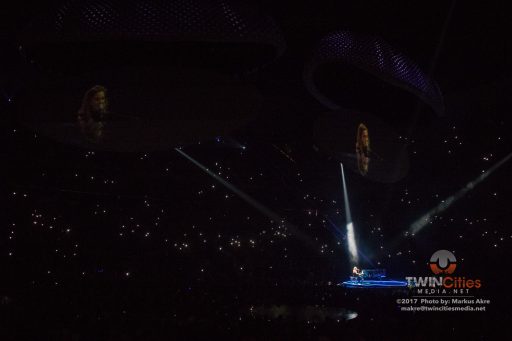 The show returned to the main stage and ventured out onto the satellite stages once more later for “Paparazzi” complete with an intro that had her crawling on the smaller stage asking fans to take her picture. “I have many instagram followers! I’m so talented” was a stab at some of our culture’s celebrities whose skills seem limited to marketing themselves. “Joanne” the title track of her latest album saw Gaga with just a guitar revealing the inspiration behind the song and talking about family issues and how the affected her. Again she managed to connect with a large crowd on a very intimate level. Her ability to change pace from over the top numbers with dancers to almost quiet ballades that highlight her outstanding voice is impressive.

For the encore “Million Reasons” Emma joined her on stage to loud cheers from the crowd. I may not be a fan of big arena shows, but last night was a great unmatched experience for me. It wasn’t the fire, the lights or the video screens. It was the little things like when Gaga and her dancers would strike  a pose at the end of a song and hold it for 10-15 seconds. That gives fans with phones and small cameras  time to focus and get some great pictures. Overall all 16.000 of us at the Xcel had a great time and as we walked out into a Minnesota summer night, we probably had a bit more spring in our step. Thanks Lady Gaga!

The phrase “hot ticket” will certainly be used a lot this weekend in the Twin Cities. Metallica and Luke Bryant are the first two shows at the new US Bank Stadium, Wilco takes over Hall […]

Photos by David Rubene / TCM   What do you get when you mix a brass band, one of those rainbow parachutes from elementary school, and one of the most powerful local voices I have […]

The ever-popular country music duo Big & Rich is comprised of Big Kenny and John Rich, both guitar playing singer/songwriters. Before their inception in 1998, Big Kenny Alphin was a solo artist while John Rich […]