Friday night, St. Paul was bustling as Bones UK, Breaking Benjamin and Korn rocked a nearly sold out Xcel Energy Center. It’s been close to three years since the nu-metal giants graced our snowy state, so the anticipation for their triumphant return was evident among those in the crowd sporting Korn hoodies, kilts, and dreadlocks. With a new album release last year, Korn was primed to bring a huge show with new music and antics.

To start the night, Camden Town based band Bones UK opened with a surprisingly powerful and enthralling set. I have to admit that until last night, Bones UK was a band existing completely off my radar. That changed entirely after their performance at the Xcel. Right from the get go, it was obvious that Bones UK were hungry to impress a stadium full of fans — especially the new ones like myself, who didn’t know too much about them going into the show. From start to finish, Bones UK delivered a heavy dose of no-bullshit rock. Watching the dynamic between vocalist/rhythm guitarist Rosie Bones and lead guitarist Carmen Vandenberg was mesmerizing. Both Bones and Vandenberg commanded the stage with noticeable confidence and prowess that was seemingly infectious. They had the audience in the palm of their hands, and it was made clear that they were not going to be an opener the audience would forget anytime soon.

While Bones UK crushed their set, I was feeling even more anticipation for co-headlining band Breaking Benjamin to take the stage. Personally, when I think of Breaking Benjamin I think back to 8th grade when I picked up a copy of Phobia at my local Best Buy (you know, when Best Buy was cool and still sold CDs). I picked up that CD without knowing a single thing about the band or what their music sounded like. I’m honestly not sure what inspired me to blindly buy a CD that day, but it introduced me to a whole new area of hard rock that I rather enjoyed.

Before last night, I had never seen Breaking Benjamin live, so I was looking forward to gaining exposure past just listening to them in my bedroom and on my car stereo. It was awesome to hear familiar favorites like “Diary of Jane”, “Until the End”, “Breath” and “Blow Me Away” mixed in pretty early in the set. What was better was hearing the audience screaming the words back in unison when lead singer Benjamin Burnley would step off the mic and point to the crowd. The crowd obviously shared the excitement and eagerness to see the band even though they were in the state not that long ago. The band was great to see and their eye-catching light show of lasers made the people in the Xcel rise to their feet.

As the evening progressed, the crowd was getting rowdy for Korn. Looking around the Xcel Energy Center, it was hard to find any vacant seats. When the curtain dropped, the crowd erupted into an electrifying ruckus. 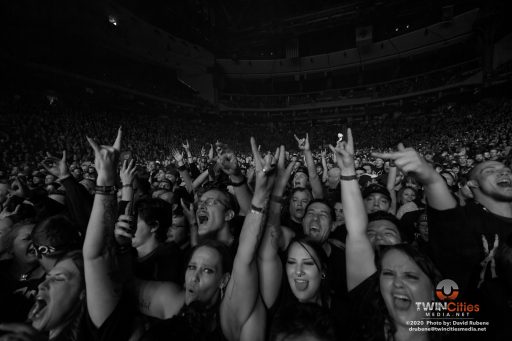 Korn instantly proved their dominance and melted the audience with their extremely bass heavy rock. 25 years into the game, it seems like Korn is as tight and as heavy as ever. Lead singer Jonathan Davis has the vocal intensity of a hungry lion growling and snarling for the last scrap of meat in front of a thousand thirsty fans. I was blown away by his precision and the depth of his voice. Drummer Ray Luzier also seemed to be on the top of his game, with his rigorous and skillful drumming.

For me, the highlight of the night was “Shoots and Ladders”, where Davis kicked off the song by walking out onto the stage playing the bagpipes and ending with the band playing the last snippet of Metallica’s “One”. Korn powered through what felt like a quick 12 song set before treating the audience to an extended encore of four songs. As their set came to a close, I couldn’t help but think how cool it was so watch people of all ages mosh and let loose in the crowd. Few bands can expand across multiple generations and still remain dominant and true to who they are. Korn is definitely one of them.

St. Vincent, touring in support of the recently released Masseduction, brought her singularly incomparable brand of rock and roll to a sold out Palace Theatre in St. Paul on Saturday night. Her Fear The Future […]

It was the first show in the Music Hall (once called Mill City Nights) and it was the Cram release show of their latest controversial project “Jesus Was a Crackhead”.  I say controversial because the […]