John Mark Nelson has burst onto the Minneapolis music scene with his complex style of songwriting and composition. He released his first album while still in high school and has proved himself to be an artist to watch in the booming Minneapolis music scene. His new album “I’m Not Afraid” was released yesterday and he celebrated with a CD release party at First Avenue. He delivered a lively set that was well received by his fans.

TCM’s Colton Davis had a chance to speak to Nelson before his show Friday:

Where did music start for you?

I grew up in a pretty musical home. My dad is a keyboard player, and my mom was a singer, so I grew up with music just being around the house. As I got older I realized it meant more to me than just a habit, it became something that I found my identity in. 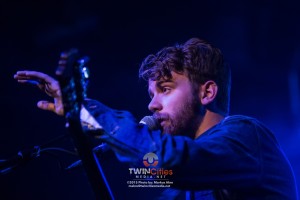 You funded “Sings The Moon” with a successful Kickstarter campaign. Was that your idea?

It was my idea. At the time when I started that I was 18 years old, so to be 18 and to look at the idea to record an album in a professional studio and to look at what that budget looks like, it was a little overwhelming. And that was right when Kickstarter was just becoming a household name, it wasn’t too alien anymore. I saw that a lot of people were turning to it and it was working, so I decided I would try it out. It worked in my favor. I don’t think I would ever do one again, but at the time it was a great way to fund the record and it was a really cool experience.

What made that campaign successful?

I think that it was the right time. Without realizing it, I just launched it right on the coattails of the record before that and I had enough momentum from that that when I announced there was something new, the momentum from the previous work was able to push the next one across the finish line. I think that if it had come out of nowhere, or a lot later, there would not have been that same momentum. 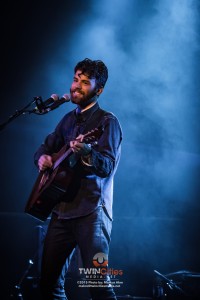 I listened to your newest album and it is pretty complex. What is your writing process like?

I’ve been able to talk to a lot of different songwriters over the years and I’ve found that my process is a little backwards from most people. I always start with a melody and it will usually come to me at the most unexpected time. It is almost never when I sit down and try to write something. It sneaks up on me during everyday life. I’ll sit down with that melody and try to put choral movement behind it and from there I just begin the arranging process. I then try to figure out what drum patterns would work, what kind of bass would work, what kind of electric guitar tones would work. So I usually go full on into the arranging and orchestration before I think about the theme, lyrics or idea. It’s a melodic and orchestration based style of writing. It has worked well for me and I’ve found that almost all of my songs have come about that way. Sometimes I’ll even be recording the full song before I’ve started to think of the lyrics.

You have a mature sound for being so young. Where does that come from?

I don’t think I can speak to the maturity of my music, but the sound itself I can somewhat pinpoint. Growing up my mom and my dad both listened to very different styles of music. My dad was always a huge advocate of jazz music and classical music. He’s a keyboard player so those are the types of music that he studied. I got the technical, discipline and complex side of music from him. My mom love to listen to the pop music from when she was growing up. Peter, Paul and Mary, Simon and Garfunkel, The Monkees, so that’s where I found the fun pop feel from her. I think the sound that I’ve grown up and make my own has borrowed from those. I try to do something that is fun and accessible, but also has some sophistication. And depth to it. I am just honored to have the privilege to make music and have people listen to it. 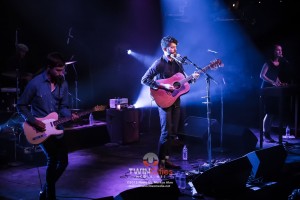 Tell me about your new album I’m Not Afraid.

There is a lot to say about it. It is different in every sense. It was made differently, the timeline was different, and the sound is different. It is very much a chapter 2 in what I’ve done. It was made really quickly, but not in a rushed way. It just kind of came together in a very timely manner. I started writing it less than a year ago and had it all written last fall. I booked some studio time in January. I didn’t want to do another Kickstarter, so I just booked as much time as I could afford and at the end of that time whatever I had was whatever I had. I booked time at “The Library” in Northeast Minneapolis and I was able to pay for 5 days. We went in Monday morning and came away Friday night with a record. We did that in 5 days and the tracking portion of “Sings The Moon” took almost two years. I ended up working with a Co-producer, Jake Hanson. He’s a very talented producer here in town. I had never worked with him before so that was a new variable. The songs themselves just had a new sound to them. A lot more driving drums and bass and electric guitar as opposed to the more acoustic sound of the past. All around it was just a lot of new variables. It was completely mixed by March or April, so the record was finished completely in less than four months.

Walk up Track
I’m not afraid
After all I’ve done
Holes in our Skin
A hundred Orchards
Boy
I’ll give you more
The Moon & the Stars
Broken
Reminisce
Control
Rain comes down
Dream last Night
Encore:
That’s what you do
The Chain (Fleetwood Mac Cover)

Varsity Theater Presents: The Oh Hellos And Some, Salad?

It’s been a while since I have been on the concert scene photographing and frankly, I’ve missed it. No you don’t get a lot of sleep, nor benefits with a pension, or any swanky company […]