Imagine Dragons have been regular Twin Cities visitors ranging from the Varsity, to a crowd of 27,000 at TCF stadium as part of MLB all star weekend. This time around their chosen venue was the well attended Xcel Energy Center in St. Paul.Their second album “Smoke & Mirrors” was released in February and the band has been touring promoting it. The band has a huge global draw and holds one of the top spots for of being streamed on Spotify and other services.

The setup included a walkway and thrust stage reaching out into the audience and singer Dan Reynolds used every inch of available real estate. The opening was dramatic.  A tall v-shaped curtain showing projected shadows and then falling to the ground to reveal the group. From the first chords of “Shots” Reynolds moved all over the stage and to the sides to get close to as many fans as possible. 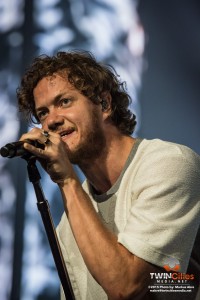 A nice touch was a shoutout to a local DJ – Paul Fletcher at Cities 97 – for being one of the first to play Imagine Dragons on the radio. They also thanked Minnesota for their early support.

A personal highlight for me (having grown up in Europe) was the cover of Alphaville’s “Forever Young”. The setlist was a mix of their hits and material from “Smoke & Mirrors”. Sound was good and lights were great and gave us photographers quite a workout. Even with a crowd of 13,000 Imagine Dragons managed to connect with their fans going as far as to take a special request for “Bleeding Out”

In the end, the crowd got exactly what they came to see, delivered in a polished package. It was about pop music, having fun and damn what some critics may say. And that makes for a good Tuesday night any week.

My Favorite Sets Of 2019 – Fred Sobottka

2019 was a great year for concerts.  I attended over 60 shows and saw a lot of very talented people and groups.  It was hard to narrow it down to 5, so I selected the […]

Joshua Tillman aka Father John Misty as developed a cult following in the Twin Cites (and elsewhere) with his lyrics, his style and his music. His songs will leave you shaking your head in amusement, […]

I don’t usually make the trek out to a show in Minneapolis unless it’s at The Varsity for two reasons: first, it’s the closest venue to me and second, I know exactly what to expect […]