You know what’s a sign of a great marriage? When you can leave the house at 930 PM on a Friday night, wave at your wife, tell her “I’m gonna get some Nooky” and she responds with “Have fun, dear”. I am happy to report, I had fun and much to the dog’s relief did not have to sleep in her house upon my return. And the Nooky? Oh, I got that in spades………Nooky Jones that is.

Minneapolis band Nooky Jones is made up of 6 musicians that have an impressive list of experience. One could almost play a game called “6 degrees of Nooky Jones” and form a connection to pretty much every Minnesota music act – Dessa, Prince, Semisonic – the connections are there, and those were the easy ones. So Nooky Jones self titled debut album had a bit of expectations to live up to. True to form the band celebrated the release with not one but two nights at the Icehouse. There are still some tickets for Saturday’s show with  Pho and DJ Sarah White available HERE 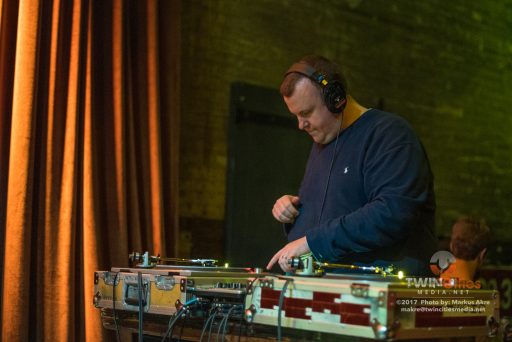 Aby Wolf and Eric Mayson took to the stage first. Their set was a very interesting mix of electro pop and some very jazzy numbers towards the end. At times Wolf’s voice blended with Mayson’s keyboards and her percussion as another instrument rather than take the lead for an quite ambient sound.

Nooky Jones packed the small stage dressed in their signature grey suits. The band’s sound is neo-soul with nods to to hip-hop and jazz. Singer Cameron Kinghorn certainly has the stage presence to fit that music style and in true fashion calls out band members for solos. A fact not lost on his fans as the first couple of rows in the audience were mostly female. I love the intimate nature of the Icehouse which makes it a perfect venue for performers with personality and Nooky Jones performing at arms reach made for a great experience. I have to call out the lights which were fantastic and played with tall ceiling and the venues features. Aby Wolf joined them for one song. All in all, a very enjoyable set by band that is tons of fun to watch and listen to. If you cannot catch them tonight, you’ll get another chance at next week’s Basilica Block Party and at the State Fair.

PVRIS, Lights, and Flint Eastwood bathe the Skyway in Sound and Lights

Little did I know, that my schedule on Friday evening would prove to be a showcase of five women led bands, each unique in their style, and each absolutely brilliant. I started at the Skyway […]

As 2018 few by in a flash, I sit here today reflecting on the year as a whole. The local Rock & Metal scene and photography are a HUGE part of my life … and […]